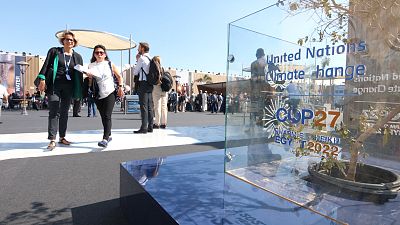 The latest data from the Copernicus Climate Change Service shows that Europe just had the warmest October on record, with temperatures almost two degrees above the 1991-2020 average.

Those figures for October are part of a much wider trend. Europe is warming much faster than the rest of the planet.

Petteri Taalas, is the Secretary-General of the World Meteorological Organisation.

"We have seen more than double warming taking place in Europe as compared to the rest of the world. And that's because of the warming in the Arctic, which has a big impact on the northern part of Europe. And then globally, the second most rapidly warming region is the  Mediterranean region."

"In the Arctic, the melting of snow and ice is contributing to this warming. And in the Mediterranean region, it's getting drier and drier, so there's not enough evaporation to dampen this warming which is usually taking place." Says Petteri Taalas.

Impact of warming of the Mediterranean

The warming that we are seeing here on land would be even more rapid if it wasn't for the oceans. It's calculated that they are absorbing up to 90% of the excess heat in the atmosphere trapped by greenhouse gases. And they are suffering.

The Mediterranean has suffered repeated heatwaves over the past couple of years and Jean-Pierre Gattuso, the CNRS Research Director, at the Laboratoire D'océanographie De Villefranche-Sur-Mer describes what impact that is having.

But do the decisions that are taken at COP27, make any difference and are they really going to change things like acidification and heatwaves? Jean-Pierre Gattuso again.

"The negotiations that are taking place at COP 27 are obviously extremely important. The scenarios that are being projected by the IPCC (The Intergovernmental Panel on Climate Change) show that if the Paris agreement is implemented quickly and fully, we can stabilize temperatures and ocean acidification. This does not mean that we will return to the situation as it was before. It means we can stop the warming and stop the increase in acidity."

The atmosphere at COP27 is business-like because everybody knows that the window is closing to reach the goals of the Paris Agreement and limit global warming to well below two degrees Celsius.

But what progress on reducing emissions has there been and are greenhouse gas concentrations going up or down?

Claire Fyson, is the Co-Head Of The Climate Policy Team, at Climate Analytics.

"Unfortunately, greenhouse gas concentrations in the atmosphere are still going up. A recent estimate came out and said that the CO2 concentration is at 416 parts per million. That's higher than it was last year, that's higher than it has been in all of human civilisation. So that's a very worrying trend because as carbon emissions continue to go up, climate change impacts will continue to get worse."

Is there any expectation that the greenhouse gas concentrations in the atmosphere will actually stabilise, soon? Claire Fyson again.

"That really depends on what we do, especially what we do over the next 8 to 10 years. If we get emissions down to zero, then yes, we will see a levelling off in those concentrations and we'll see temperature rise starting to plateau and climate change impacts stopping to get worse."

"Recent assessments suggest that actually, we're going to head for around 2.4 to 2.8 degrees of warming. So really not a place that we want to be."

Even with a rapid reduction in emissions in the next few decades, some climate change effects will continue for centuries to come. These include sea level rise and the melting of the cryosphere.

Climate Now Debate 2022: How do we beat wildfires?

Ozone pollution in a hotter future