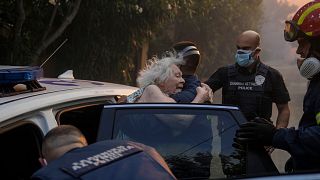 In 2022, the devastating impact of climate change became increasingly visible.

Droughts and wildfires consumed entire continents, crops failed, and millions of people were forced to move as their homes became uninhabitable.

But people also fought back, as we recognised the urgency with which action is needed to slow the growing impact of the climate crisis.

Here are some of the biggest climate stories of 2022 in photos.

Lithium represents one way out of our global reliance on fossil fuels. But, as photographer Tom Hegen captured in South America, there is a dark side to our swiftly electrifying world.

Mining this chemical can be deeply harmful to the environment. Hegen's aerial photos document the 'Lithium Triangle' located where the borders of Chile, Argentina and Bolivia meet.

At one point, nearly two-thirds of the EU was under some kind of drought warning.

As water levels in reservoirs sank to their lowest levels in decades, all sorts of structures started to emerge. Parts of the old village of Aceredo in northwestern Spain reemerged as drought hit the Lindoso reservoir.

It was submerged three decades ago when a hydropower dam flooded the valley.

Wildfires blazed around the world

There were significant wildfires in Portugal, Greece, France and the US, to name a few. Blazes chewed through homes and forests with photos acting as an intense reminder of the damage these fires can unleash.

Pakistan was hit by extreme flooding

Extreme weather conditions driven by climate change also saw Pakistan hit by historic rains and flooding in September. At least 1,700 people were killed and over €40 billion in damages were done across the country.

At one point, a third of the country was submerged, forcing hundreds of thousands of people to move to safer places. The waters washed away or damaged 2 million homes.

Some areas were still underwater more than a month after the torrential rainfall. But the South Asian nation is responsible for less than 1 per cent of global emissions - a stark reminder of the realities of climate injustice.

Pakistan is among the 10 countries worst affected by climate change and led a push at COP27 for rich countries to recognise the vulnerability of the developing world.

In October, protest group Just Stop Oil kicked off a month of action by throwing soup over Van Gogh's Sunflowers painting at the National Gallery in London.

They also defaced luxury car showrooms, the headquarters of a climate sceptic think tank and blocked roads and bridges. Earlier this year, we spoke to some of the activists behind the art protests to find out more about why they were doing it.

The Brazilian election brought hope for the Amazon

Brazilian President-elect Luiz Inacio Lula da Silva was met at COP27 in November by huge crowds. After his election victory in October, he promised bolder environmental action in the next for years, including fighting for zero deforestation in the Amazon.

He faces a stiff challenge but told the UN climate conference in Sharm El Sheikh, Egypt that "Brazil is back".

Four years of drought and deforestation caused by people cutting down trees for farming and fuel have turned the Androy region of Madagascar into a dust bowl.

This year, millions in the country faced famine. Food shortages were compounded by three cyclones and one tropical storm that ravaged the country back in January.