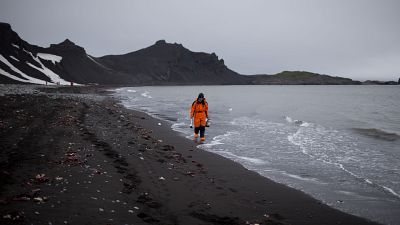 Antarctica's white landscape is turning dark in the area where thousands among tourists and researchers flock every summer.   -   Copyright  Natacha Pisarenko/AP   -
By Giulia Carbonaro  •  Updated: 24/02/2022

The blinding white landscape of the frozen continent of Antarctica is turning black.

If there was a competition for the best picture to represent climate doomsday, this would probably be it.

The troubling phenomenon was observed by researchers at the University of Santiago de Chile, who noticed that the snow surrounding tourist-landing sites and research stations in the Antarctic archipelago and peninsula was getting darker by the year.

They suspected the darkening of the snow might be caused by human activities, and their studies confirmed this theory.

The dramatic anomaly is caused by black carbon pollution coming from tourism and scientific trips to Antarctica, researchers found, which is causing the continent’s snow to darken and melt.

Wait. Are there even that many tourists in Antarctica?

Antarctica, once a punishing, perilous expedition for brave and adventurous explorers, has become an increasingly popular holiday destination in the past decade.

Between October 2019 and April 2020, more than 74,000 tourists visited the frozen continent. That was about 32 per cent more than only a year earlier, and twice the total a decade ago.

Most of the tourists travelling with the International Association of Antarctica Tour Operators (IAATO)arrived by cruise ships, while less than 1 per cent reached the continent by plane.

Each visitor is causing Antarctica to lose 83 tonnes of snow. Each summer - the only season where journeys to the continent are relatively easy - researchers estimate Antarctica loses 23mm of snow because of the black carbon produced by vessels, helicopters, planes, trucks and diesel generators.

Tourists' visits have inexorably contributed to making Antarctica’s snow, one of the purest in the world, much less pristine.

But it's not just the tourists' fault. Scientists have found that the biggest black carbon footprint is produced, in fact, by researchers.

As teams of researchers need vessels, planes, helicopters and generators to operate their equipment, their footprint ends up being 10 times greater than that of a tourist.

The concentration of black carbon observed by the researchers was far greater around research stations, such as Palmer Station, McMurdo Dry Valley Field Stations and the Amundsen-Scott South Pole Station, than anywhere else.

There are 76 active research stations in the area covered by the Antarctic Treaty, which provide accommodation for around 5,500 people each summer.

What is black carbon?

Black carbon is the mix of particles and gases resulting from the incomplete burning of fossil fuels, biomasses and biofuels.

Black carbon particles give soot its colour and are known to absorb sunlight and convert it to heat. They're mainly originated from diesel engines, cookstoves and wood burning.​​

Black carbon, or BC, is estimated to be one of the world's major contributors to climate change, second only to carbon emissions. But unlike CO2, black carbon stays in the atmosphere for only a few weeks. That means efforts to reduce it would bring immediate benefits in our efforts to slow down global warming.

Is black snow that bad?

Let's just say, it's not a matter of aesthetics.

Researchers measured 155 snow samples collected from 28 different sites in four consecutive summer seasons between 2016 and 2020 to assess the impact of black carbon on the albedo - a measure of how much light is reflected by the snow’s surface.

Albedo is often referred to as the "whiteness" of a surface, which is extremely high in snow: normally, a snow surface is able to reflect 90 per cent of incoming solar radiation, thanks to that whiteness.

But darker snow doesn't have the same property: black snow absorbs more of the sun's radiation, which consequently makes the snow melt faster.

In the sample analysed, researchers found an average of three nanograms of black carbon per gram of snow, up to four times higher than the levels in Antarctic regions largely untouched by human presence.

However, the biggest contributor to snowmelt in Antarctica is still global warming, with much more significant numbers than local black carbon pollution.

Scientists predict that if temperatures rise globally by 6 to 9 degrees, we will lose more than 70 per cent of ice mass in Antarctica. This would have a dramatic impact on sea levels, which would experience a potential rise of more than 40 metres.

Can we turn things around?

It's not too late to protect Antarctica.

One solution to the problem of local black carbon emissions would be to limit the number of tourists to the continent every year, something akin to what Venice did to prevent the city from drowning.

Another solution would be to reduce the use of vehicles powered by fossil fuels in Antarctica and replace them with hybrid or electric ships and trucks.

Research sites should not be allowed to expand in size, as many have done in recent years, including the UK with its Rothera station. They should also be encouraged to adopt energy-efficient equipment powered by renewable energy.

And action is needed as soon as possible: in the case of Antarctica, every gram of snow that melts will be lost forever.