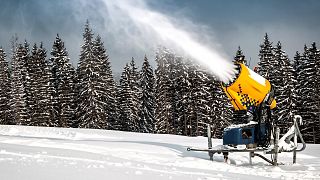 This year’s Winter Olympics in Beijing will see 91 countries compete in sports across the snow and ice - the vast majority of which will be made artificially.

Like many parts of the world, last year was China’s hottest year on record, with average temperatures exceeding ten degrees Celsius.

As a consequence, snowfall has been minimal in the East Asian nation, leading to concerns surrounding the viability of hosting the world’s largest winter sports spectacle.

Instead, Olympic organisers have resorted to creating fake snow for the slopes at the Yanqing Ski Resort. 290 snow cannons have been blasting round the clock since December 2021 in order to prepare for the Games.

"It makes me sad that we need so much man-made snow to sustain winter sports," says Taylor Gold from the U.S. Snowboard Team.

"Even though the halfpipe is typically made out of man-made snow, it still needs really cold temperatures for them to be able to blow the snow. Those temperatures are coming later and later in the year."

Will the Winter Olympics become a thing of the past?

Experts say that by the year 2050, only ten of the past 19 Winter Olympic venues will have climates that are viable for hosting snow sports.

"The biggest threat facing these cold, mountainous regions is a warming climate,” says Tessa Garte, a PhD candidate from the University of Colorado-Boulder.

"That has massive ramifications obviously for the Olympic Games, as well as the local economy, local climate and local weather.”

The International Olympic Committee says it will contractually obligate future hosts to be climate positive, meaning they will have to remove more carbon dioxide from the atmosphere than they emit.

The Beijing Games, meanwhile, are supposed to be entirely climate neutral. All venues are expected to be powered by renewable energy, while the four ice rinks will use green CO2 technology for cooling.

But the unusually high temperatures mean the Games will require almost 890,000 cubic metres of water to create enough artificial snow for the event.

It’s something Taylor Gold remembers only too well from Sochi 2014.

"They were spraying some chemicals on the halfpipe to try to get it to stay in shape, but if you go back and watch that event, it's clear it was really warm. It was not ideal for snowboarding at all,” says Gold.

The American snowboarder is now a member of Protect Our Winters, an athlete-driven environmental group aiming to protect natural landscapes from the impact of climate change.

Like many winter sport enthusiasts, he is concerned about the implications of decreasing snowfall around the world.

"There's years when we'll go over to Europe and we'll have tons of snow and it'll be great, and some years we'll come over and it'll be barren - besides where they've blown man-made snow,” says the Olympic hopeful.

"Trying to do things on an individual level is great, but at the end of the day, we really need systemic change to have the impact that we need to preserve these places."

Watch the video above to find out more about the future of the Winter Olympics.