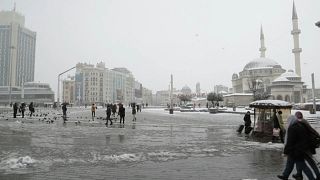 As each month goes by, we witness more unusual or extreme weather patterns caused by climate change.

Already in 2022, there’s been extreme winds grounding flights in the UK, heavy rains causing floods in Australia and now in March, as spring is arriving, parts of Turkey, Greece, Cyprus and Israel have received unseasonal snow.

Although you wouldn’t expect sweltering temperatures at this time of year, snow isn’t usually on the menu either.

After a rare snowstorm hit Istanbul this weekend, more than 400 flights were cancelled. Normally, at this time of year, you’d expect temperatures of around 8.5°C in Turkey’s capital.

Meanwhile, parts of Greece and Cyprus were hit by a storm dubbed 'Filippos' which caused temperatures to plummet and brought heavy snowfall in Athens and surrounding areas.

In Afidnes, near Athens, where snow was at least half a metre deep, residents were not prepared for such weather.

"It is very difficult, because we have uphill roads, we have ice, we cannot get out. We are not used to using snow chains," says local resident Sotirios Dedas.

In the Attica region, where Athens is situated, authorities blocked heavy vehicles from using the country's main highway connecting Athens to the north and all vehicles were required to use snow chains.

Schools in northern Athens and Greece's western and central regions were also closed due to the adverse weather conditions.

This is particularly surprising weather as the average temperature for Athens in March is just under 12°C.

Parts of Israel and Palestine also received some snow. Images show a light dusting in Jerusalem and on the hills near Nablus in the West Bank.

Although the coverage was much less dramatic than in other places, when temperatures here would usually be over 12°C, any snow is a surprise.

Watch the video above to see Athens and Istanbul blanketed in snow.