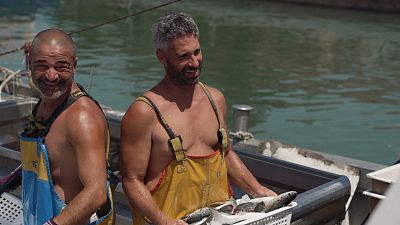 At first light on the Adriatic Sea, Captain Davide Sanulli and his crew begin harvesting mussels off the coast of Emilia-Romagna in Italy.

It's already a tough start to the day getting up this early, but things are about to get harder for them. Mussels grow on long underwater ropes. Sometimes it takes a lot of effort to pull them out.

To Davide the Captain it's just another day at work. He never complains, "each job has its difficulties", he explains.

Machines do help the fishermen, but their noise can be deafening. Mud often gets in their eyes and they must also watch out for moving parts. The boat is effectively a loud wobbly factory floor in the middle of the sea and it allows little time for rest.

Davide tells us that in the past everything was done manually, so the machines and technology have made things easier on their backs. However, he points out that it has also made "the work much more frantic".

His crew wears protective gloves, heavy aprons and rubber boots that are intentionally too large so they can quickly be kicked off in the event that they accidentally fall overboard. On a deck covered with slippery mussels, falls are a major risk.

According to Davide, fatigue is the main reason they might slip and fall into the water or bang their head.

Fishing and offshore aquaculture are very risky professions. On moving trawlers, fishermen can fall overboard unnoticed and drown. Ships can collide with obstacles and sink. In 2019 alone, at least 16 fishermen died in European waters and more than two hundred were seriously injured.

For nineteen-year-old Lorenzo, mussel harvesting is just a summer job. He says it pays well, but few young people are really interested in choosing this career. He tells us that it's partly because it's hard to be a fisherman, but also because in the summer you have to go to bed early and rise early, "a sacrifice not many young people are ready to make".

This means that fishing is mostly a job for middle-aged men whose wives are often portrayed as homemakers, anxiously waiting for the men's safe return.

In fact, women today play a key role in the fishing business administration, dealing with processing and sale of catch. They almost never go out to fish, but there are rare exceptions.

A tough job for women

Çiğdem Moçoşoğlu is a fisherwoman with two adult daughters. She works on a small fishing boat. She is the only fisherwoman in Cesenatico and in the whole of the Emilia-Romagna. To her, it's not a tough job for a man, except on stormy days when the boat can bump into floating tree trunks. However, she does this that for women "who also have to take care of the house and the children, this job is beyond hard, it's the hardest".

Working conditions regulations often disregard small vessels. There are more rules for larger ships that spend weeks and months at sea. Fishermen in Cesenatico say the tough work on smaller vessels can also affect your health.

There’s a global discussion on how to make fishing safer. Part of the solution depends on stricter regulations. In Europe, that includes a number of EU directives and international conventions, like the International Labour Organisation's so-called Convention 188 'Work in Fishing', which is so far only ratified by seven EU member states.

Another tool is targeted funding. The EU supports training and some vessel modifications that improve safety without increasing catches. However, according to the regional administration, boat upgrades are rare as half of the cost has to be paid by the shipowners themselves.

According to Vittorio Elio Manduca, the Head of Hunting and Fishing Services in Emilia-Romagna, they have tried to encourage fishermen to improve their equipment via various meetings and promotional activities. However, he tells us that they were unable to "convince many to invest in onboard safety".

Vittorio says that fishermen seem keen on training, "but won’t make material investments, and that is, unfortunately, a problem".

Upgrades of older vessels are costly and limited by the lack of space onboard. But new ships can be designed with better safety in mind.

Alberto Stefanini is a technical safety engineer. He inspects fishing vessels and points out small improvements that can make a big difference, like covers for moving ropes, security clasps for fixtures, the height of railings and air-conditioning. All these things make work more comfortable and thus safer.

A calm and cheery crew can cope better with the fatigue that is unavoidable in this kind of work. A crew like that has fewer accidents onboard and the fishing vessel overall is safer

Massimo Bellavista works with fishery cooperatives, trade unions and their EU interlocutors to improve work conditions onboard local vessels. He does so using regular technical inspections and safety training.

To him, the main goal when fishermen go out to sea is for them to come back safely. That's why it's extremely important to implement and follow the rules. "Italy is a little behind in the process of ratification of Convention 188, but we are working on it, and fishermen must try to anticipate these changes, and not wait for stricter rules to become compulsory", he explains.

Back in the Adriatic sea, the four shellfish farmers on Davide's boat spend seven hours at sea. On average they harvest two tons of mussels, a task that makes them visibly tired.

In the coming months, Davide is planning to upgrade all his equipment to make work easier and safer. He has already applied for a 70 000 euros work package to do so and 50% of that will be funded by Europe.

On their way back to shore, the crew relaxes for a while before they arrive at the harbour to unload the mussels and prepare the boat for another grueling day of fishing.