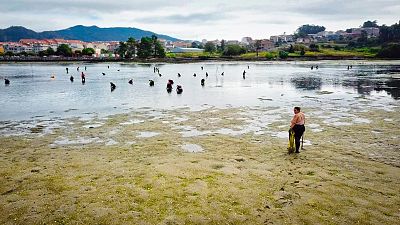 In Europe, women play a key role in fishing and aquaculture, but too often their work remains unrecognised and underpaid. Limited career choices and unfair pay gaps mean many women have a hard time making their way in this male-dominated sector.

The mariscadoras pick clams and cockles out of the sand banks of Galicia, in north-western Spain and earn around 1000 euros a month. In the past, this wasn’t considered a job and there was no financial stability or employment rights.

The situation started to change in the 1990s when mariscadoras’ organisations joined fishermen’s guilds. This recognition as workers of the seafood sector came with legal protection, social security and strict quotas to ensure stocks are not overpicked. Today, shellfish pickers’ rights are protected through an active national association, representing over 30,000 women in Spain.

Rita Míguez de la Iglesia is president of ANMUPESCA. She says it's an ongoing battle to achieve more rights.

In Europe, many women in the fisheries sector remain statistically and legally invisible. Take the example of net menders in the port of Vigo on Spain's Atlantic coast. They work outside, sitting on a concrete floor, stitching nets for just six euros an hour. They play a role in the fishing sector, but are not officially recognised which means they do enjoy the same advantages of formal employees.

“I think it’s illogical that office workers are retiring early, and we are not. This is not fair," says Manola Bamio, a net mender in Vigo. "They work in comfort, while we are risking our health, working in the heat and cold. Illness, back problems - we have all these health problems, but they are not recognised.”

It’s estimated more than a 100,000 women contribute to the EU fisheries sector. Accurate statistics are not available, but some figures claim women represent roughly 13% of capture fishery employees, a quarter of the workforce in aquaculture and more than half in seafood processing.

The Galician Foundation for Fishing and Shellfishing (FUNDAMAR) runs several EU-supported projects to confront women’s invisibility and promote gender equality in the sector. María Caldeiro, General Director of FUNDAMAR says the work women used to be considered of little value.

"While men went to sea, women worked on land," she explains. "Their work was just as necessary as men’s, but it was considered something complimentary, and was not recognised socially or economically.”

In the seafood processing sector, women often do menial jobs in factories owned and managed by men. One artisanal cannery in Northern Galicia is bringing about change. Currumar Cannery was founded by three women, with support from FARNET - a community-led local development network under the European Maritime and Fisheries Fund ( EMFF).

Nieve Medina is co-founder of the cannery. Her decision to create the company was born out of necessity: “I am actually an interior designer, but life in Galicia brought me into this field, as well as the general employment situation after the crisis of 2008. This led me to look at turning something we were making ourselves at home into a profession.”

Specialising in sustainably-sourced tuna in olive oil, the cannery is growing and branching out into ready-prepared meals. Success stories like this are inspiring - but more effort is still needed to increase women’s visibility, reduce pay gaps and address other gender inequalities in the blue economy.

Ocean energy: "what we need to see is sustained support"

Wild vs farmed fish: what should you choose?