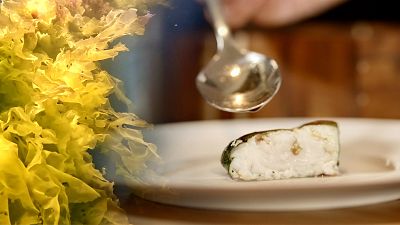 Ulva, or sea lettuce, is one of the tastiest kinds of seaweed. It promises great potential for marine cultivation in Europe   -   Copyright  Illustration: Euronews   -
By Denis Loctier  •  Updated: 26/10/2022

In the clean coastal waters of Western Sweden, not far from Gothenburg, tens of kilometres of ropes are hanging suspended just under the water surface. This is a seaweed plantation — a new farming site worked by Gaëtan Zackrisson and his team.

It's the seeding season, and today they are here to plant more ropes with tiny algae seedlings. Sea lettuce, or Ulva, is an experimental crop, not typically grown on farms at sea.

"These came from the lab this morning — we're going to put it down in the sea to grow here, but it's already eatable. It's pretty nice. It's very small, but it will become about 20, 30, 50 centimetres long — so it becomes a crunchy salad",- explains Gaëtan Zackrisson, Process and cultivation developer, Nordic Seafarm.

Planting of ropes with seaweed seedlings at the sea farm

Every year, more and more of these farms appear along European shores. But most of them produce sugar kelp or other more common seaweed varieties.

Sea lettuce has more protein and is less salty, which makes it tastier and easier to cook.

But its cultivation here remains an exception: the methods of its large-scale production at sea have not yet been fully developed.

This farm believes it's on the right track. Since the pilot plantation, over a year they have increased the size 100 times. They expect to harvest 20 tons of sea lettuce in a couple of months.

"You get your proteins, you get your minerals, and get a good flavour from the sea, which is pretty cool. I like it."

This project, backed by the European Union, is deeply rooted in scientific research. Nordic Seafarm began as a university spinoff.

One of its co-founders, Göran Nylund is a researcher who has been working with seaweed for the past 20 years. The success of open-water cultivation largely depends on scientific selection and preparation of the seeding material.

In some sunnier regions, Ulva is grown in tanks on land. But for countries like Sweden, sea cultivation has plenty of advantages, it doesn't occupy valuable land, doesn't rely on expensive infrastructure or fertilisers, and can be easily scaled up.

"What you have seen in the sea is very much a result of the research we've been doing here. So before, when we worked with Ulva we have never managed to do it at this scale. So we are trying to find the protocols, a method to have a large-scale production of this seeding material",- says Göran Nylund, Production and cultivation manager, Nordic Seafarm.

This new offer meets the growing demand for more sustainable food alternatives. Signum, a small lakeside restaurant, is one of the many supplied by Nordic Seafarm with seaweed for their dishes.

Thomas Sjögren, a Swedish celebrity chef and owner of Signum, used to go to the sea and pick up some fresh algae every morning — but now the menu of his restaurant includes farmed seaweed, along with cultured fish and locally grown vegetables.

Wrapped around a slice of halibut, sea lettuce turns into a thin crispy crust when fried.

"You both get the flavour from it, and the saltiness, and the deepness which is super nice, and the umami flavour to a whitefish that's normally quite bland — it needs some flavouring and then to connect it and flavour it with the ocean — this is a beautiful way to do it, I think!" — says Thomas Sjögren.

Although seaweed is a staple in Asian cuisine, it is relatively unfamiliar to European consumers. But many believe that is about to change. More restaurants are embracing locally grown algae, and healthy and sustainable eating remains a steady trend. With an apparent breakthrough in farming technologies, the sector anticipates what they call a "blue revolution" shifting more of the food production from land to the sea.

"Right now it's quite decentralised, and everyone is doing their own thing and the regulations are different in different countries. We actually have an idea to make a network of the certified farms where we can maximise the positive impact that we can have and, and make it easier for the customer to choose the right product for their purposes",- says Jonatan Gerrbo, Business developer, Nordic Seafarm.

Further boosting this sector, the European Commission has prepared its Algae initiative — a set of measures to increase the sustainable production, safe consumption, and innovative use of algae.

And it's not just about seaweed. In Riga, a small Latvian company found an innovative way to produce spirulina — tiny blue-green algae used around the world as a dietary supplement.

Founded by two female engineers and supported by the EU, "SpirulinaNord" sells algae as a superfood with clinically proven health benefits.

"It has a very unique composition: there's a lot of antioxidants, B vitamins, iron, calcium and so on — more than 200 valuable elements for our body."

Their know-how is a closed system to grow fresh microalgae. It's different from dry spirulina supplements that are often disliked for their strong taste.

Fresh spirulina doesn't have that disadvantage. The company mixes its daily harvests with local organic juices and sells them as healthy drinks or syrups.

"It's really important that people are trying our products, because only after trying they understand that it's much more interesting, much more valuable, with much better taste",- says Kristine Vegere, Co-owner of SpirulinaNord.

The Latvian company hopes to appeal to urban residents health-conscious enough to include this rather pricy food supplement in their regular diet.

One of the target groups is clients of sports and wellness centres, as well as specialised health clinics that can recommend spirulina to their patients.

Clinical studies show a number of beneficial effects of spirulina supplements — they can help with fatigue and inflammations, reduce obesity, and lower cholesterol and blood pressure.

"We know the benefits from this powder in the previous forms, and all these benefits are there, inside. Now it's time to see what will happen with this liquid form, and how useful it will be in the future."

Another promising market is eco-lifestyle retail centres. The company sells its drinks, syrups, and frozen spirulina at a dozen locations around Latvia and other Baltic states.

These customers are ready to pay slightly more for healthier and more environmentally friendly products. The challenge is convincing them that not all spirulina has the strong flavour of the dry powder supplement.

"Most of the people have never tried it. And those who have — we usually see in their faces like, Oh, spirulina now, thanks, I don't want it anymore! And then usually the reaction is like, Oh, it's like lemonade. And you are saying there is algae — really?" — explains Agnese Stunda-Zujeva, Co-owner of SpirulinaNord.

Some of the regular clients are men leading a sporty lifestyle, but most of the customer base are women.

Agnese Stunda-Zujeva again, "What we see at the moment that 90% are ladies — in all ages, but young moms especially. Young moms need to go to job and afterwards play with kids, make dinner and do everything. So they need this energy boost in the evening."