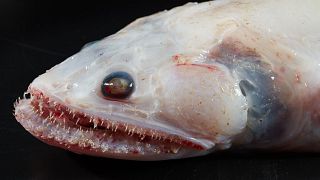 If you’re scared of what lurks in the depths of the ocean, look away now.

A host of strange new sea creatures have been discovered deep in the Indian ocean.

In an expedition to Australia’s remote Cocos (Keeling) Islands Marine Park, scientists from Museums Victoria research institute encountered weird and wonderful new animals - from a sharp-toothed lizard fish to a blind, gelatinous eel that gives birth to live young rather than laying eggs.

On their 35-day, 11,000 km journey, scientists scoured ancient sea mountains and canyons, collecting samples as far as 5 kilometres from the surface.

“We are proud that our maps, data and images will be used by Parks Australia to manage the new marine park into the future.”

What animals did the scientists find in the deep?

It’s often claimed that we know more about the surface of the moon than we do about the ocean floor.

This odd-looking animal is a hermaphrodite - it possesses both ovaries and testes simultaneously.

The Sloane’s Viperfish is also described by Museums Victoria as ‘voracious.’ The fish has massive ‘fangs’ and rows of light organs to attract prey.

Nearby, the scientists located a previously unknown blind eel with loose, transparent, gelatinous skin. Most fish lay eggs - but this eel gives birth to live young.

The slender-snipe eel reaches up to a metre in length, but weighs just 50 grams. It is unable to close its curved jaws, lined with hooks to tear apart crustaceans.

They also discovered a type of deep sea flatfish with eyes on one side of its head. The creature has evolved this way in order to keep an eye out for predators while it lies on the seabed.

Many of these animals look like something out of a horror movie - but not all. Researchers also found a bemused looking deep sea batfish, a tiny creature that ambles over the sea floor on arm-like fins.

What else did the expedition uncover?

The team also produced three-dimensional images of the massive mountain underneath the Cocos (Keeling) Islands themselves, which has never been mapped in detail before.

The vast seamounts formed as giant volcanoes between 50 and 140 million years ago. Over time, they eroded into the seafloor - where they now host a rich ecosystem of ocean life.

Nelson Kuna, one of two Hydrographic Surveyors onboard from CSIRO, explained the importance of this work.

“We’ve used the full ocean depth mapping capabilities of RV Investigator to completely survey around the Cocos (Keeling) Islands, from coastal depths less than 100m all the way down to the abyss some 4,800m below,” he said.

“The data set now covers a substantial area of the new marine park and shows the Cocos (Keeling) Islands as the twin peaks of a massive seamount that rises nearly 5000m from the surrounding seafloor.

“It’s truly an honour to see, for the first time, these stunning features revealed from the deep.”

Is there still time to restore our oceans? We asked marine experts