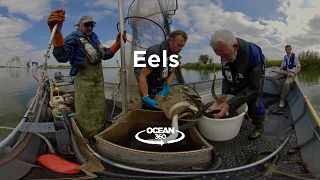 The European eel is an amazing creature. Born in the North Atlantic, they live in Europe’s rivers only to migrate back to the Sargasso Sea once in their lifetime to spawn.

Eels used to be abundant in Europe, but since the 1970s the population has fallen by 90%. Today, the eel stock are highly depleted due to decades of unsustainable fishing and other man-made causes.

In 2007, the EU adopted a set of measures known as the Eel Regulation. Providing a framework for the recovery of the stock, it aims to help EU member states establish long term eel management plans that should see at least 40% of adult eels survive and escape back to the sea.

The measures include limits on commercial and recreational fishing. The regulation also aims to make it easier for the fish to migrate through rivers which are frequently blocked by dams and weirs. More than a million such barriers exist in European rivers - all of which need to be mitigated.

The status of the European eel remains critical — but there’s hope that these measures, as well as advances in aquaculture, and crackdown on illegal eel trafficking, will help preserve and restore the population in the coming decades.