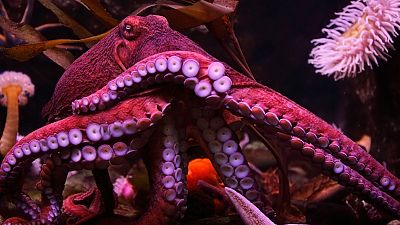 Octopuses are set to have their feelings protected under UK law.   -   Copyright  fjdelvalle/Getty
By Lottie Limb  •  Updated: 28/11/2021

Octopuses are finally being recognised as sentient beings in the UK. Intelligent, curious and shape-shifting, their capacity to have feelings is clear to anyone who has experienced them in the wild - or watched the documentary My Octopus Teacher.

Now the UK government is catching up by including celaphods - octopuses, squids and cuttlefish - as well as decapod crustaceans like crabs, lobsters and prawns - in its Animal Welfare (Sentience) Bill.

The proposed legislation was expanded on Friday after an independent review by the London School of Economics (LSE), looking at more than 300 scientific studies, found “strong scientific evidence” that the sea creatures can feel pain, distress and harm.

Lead researcher and associate professor at LSE’s Centre for Philosophy of Natural and Social Science Dr Jonathan Birch says the amendment will help to remove a “major inconsistency.”

“Octopuses and other cephalopods have been protected in science for years, but have not received any protection outside science until now. One way the UK can lead on animal welfare is by protecting these invertebrate animals that humans have often completely disregarded.”

However it does not change any existing legislation, industry or restaurant habits, despite the report showing it is firmly against practices like declawing crabs (before returning them to the water) and boiling other decapods in water which it calls an “extreme slaughter method.”

Animal welfare groups have sounded the alarm about the possibility of octopuses being factory farmed.

Why factory farming octopuses would be so cruel

As consumption of octopus meat creeps up, there are plans to rope octopuses into factory farming - an industry that would be uniquely cruel, according to a report from Compassion in World Farming (CIWF) last month.

This summer, there was public outcry over a baby octopus being sold for 36p in a British supermarket. It seemed distressing to many that a life could be priced so cheaply.

36 pence for a dead baby octopus, one of the most amazing creatures to ever swim the seas.

I swear we do not deserve this world. ? pic.twitter.com/ln0yjeQcpv

But the scale of octopus farming is also shocking: 60,000 tonnes of octopus were consumed in Italy last year, the most octopus-hungry nation in the EU. While Spain has been conducting research into open-ocean net cages and tanks on land.

Being confined to a cage with others is a terrible fate for the solitary octopus, which is used to roaming the ocean alone. Putting it at risk of boredom at best, cannibalism at worst.

The brain of a common octopus has 500 million neurons, making it as smart as a dog or a three-year-old child.

Marine biologist Dr Elena Lara, fish research manager at CIWF and author of the report, says the Oscar-winning Netflix documentary “gave the world a moving glimpse into the lives of these unique, naturally solitary and fragile wild animals.

“People who watched it will be appalled to discover that there are plans to confine these fascinating, inquisitive, and sentient creatures in factory farms. Their lives would simply not be worth living.”

The charity put together eight reasons - one for each tentacle - why intensive farming octopus is immoral.

8. Octopuses are solitary by nature

Octopuses aren’t used to living together. The crowded conditions typical of factory farms would bring out aggressive, territorial behaviour, which could lead to cannibalism.

7. They are highly inquisitive and intelligent

One of the most captivating moments of My Octopus Teacher is when the octopus that Craig Foster befriends in a South African kelp forest is seen playing with fish, just for the fun of it.

The octopus has an intimate and dynamic relationship with her environment, exploring and shaping it around her. Life in captivity would pale in comparison, in unimaginable ways.

Approximately 20-25 per cent of all wild-caught fish are used to make fishmeal and oil, which would be the basis of a captive octopus diet.

6. Their carnivorous diets would be unsustainable in a farming environment

Farming octopus means feeding them, and with the global crisis of overfishing that’s just not sustainable. Approximately 20-25 per cent of all wild-caught fish are used to make fishmeal and oil, which would be the basis of a captive octopus diet.

This would have a host of negative environmental and human impacts, including worsening food security in regions such as West Africa where the main industrial fishmeal factories are located.

5. Little is known about their complex welfare needs and suffering in captivity

Octopus farming is an attempt to farm wild animals who have never been farmed before, says CIWF. So what are the chances that humans can meet their complex welfare needs?

4. They are fragile creatures that are easily injured

The cephalopod’s fantastic flexibility is partly due to the fact it has no internal or external skeleton. Their skin is very fragile - a real weak point in a farm environment where they are likely to be damaged by human handling or aggressive interactions with other octopuses.

Octopuses can be a threat to themselves too, as their fast jet-propelled movement means they could crash into tank walls or cages.

3. There is currently no scientifically sound method for the humane slaughter of octopuses

How do you kill an animal like an octopus? Current studies on wild-caught octopus slaughter mention a variety of brutal methods, including clubbing their heads, slicing their brains, asphyxiation in a net, and chilling in ice.

Humane alternatives - which would ensure that octopuses are rendered immediately unconscious before being killed, explains CIWF - are yet to be developed or scientifically approved.

2. There are no current laws to protect the welfare of farmed octopuses

As octopuses are totally unprotected from inhumane slaughter methods in the EU, US, Mexico and Japan, it would be irresponsible to give farming the go ahead in these regions. Proper legislation is sorely needed.

1. It is incompatible with the EU Strategic Aquaculture Guidelines (SAGs)

The EU’s new strategic guidelines encourage the fish farming industry to end its reliance on fishmeal and fish oil made from wild-caught fish, and to diversify with more sustainable species.

Factory farming octopus is not only cruel to the eight-legged wonder, it is a big step in the wrong direction for the blue economy.