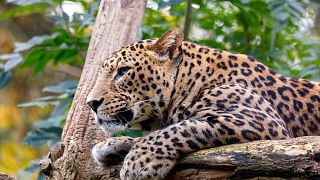 In the 1990s, Irish singer Bob Geldof and friends campaigned to “drop the debt,” in an effort to alleviate the economic struggles of developing nations.

A decade later, €122 billion of debt was cancelled for 36 countries by G7 finance ministers.

Fast forward to 2022, a different kind of debt cancellation is on the cards.

‘Debt-for-nature’ swaps could see debt-ridden countries on the brink of default being offered a path to solvency. But there’s a catch: they have to use the money for environmental protection.

Deals are in the pipeline for Ecuador, Cape Verde, and Sri Lanka but what would they mean exactly?

What is a debt-for-nature swap?

Every country has national debt.

This is money borrowed by governments to finance public spending or infrastructure investment. But some find this debt easier to manage than others.

Money lent is known as a sovereign bond and the rate at which these bonds are traded, or how much people are willing to pay for them, can tell you a lot about a country’s finances.

If the bonds are of low value then interest rates will increase, making borrowing for the government, and the population at large, more expensive.

For example, when Liz Truss was Prime Minister the value of UK government bonds fell due to her financial policies, which were widely regarded as reckless and ill-informed.

Debt-for-nature deals or ‘Green Bonds’ allow countries with debt problems to ease their difficulties in exchange for nature conservation. This could mean refinancing debt payments so they use less annual government expenditure, or offering better interest and payment terms.

The money saved is then earmarked for conservation, with conservation promises used by nature-rich and credit-poor countries to secure financing deals involving sovereign states, multilateral development banks and NGOs.

Ecuador, for example, is in talks with the Pew Charitable Trusts plus the Inter-American Development Bank and U.S. International Development Finance Corporation, two of the people with knowledge of the planned deal said.

How the Galapagos Islands could benefit from debt-for-nature

Ecuador has defaulted on its national debt more than once and its sovereign bonds are being traded at “distressed” levels.

However, according to sources close to the talks, it is currently negotiating with investors and NGOs to get €770 million of its debt refinanced more cheaply, promising to use the money on biodiversity and tourism hotspot, the Galapagos Islands.

"There's now a big push to get nature into sovereign debt markets," said Simon Zadek, executive director at NatureFinance, which advises governments on debt-for-nature swaps and other types of climate-focused finance.

"The tragedy of debt distress offers a real opportunity," he added, pointing to nature-rich countries which look like ideal debt swap candidates after big drops in their bond prices this year.

The ongoing talks are confidential. But if they come to fruition they could result in the biggest ever debt-for-nature deal, allowing Ecuador to trade in its rich biodiversity for its poor finances in a wider region where nature has been badly depleted.

Which countries are doing debt-for-nature deals?

While the Ecuadorian deal may seem large it would be dwarfed by alleged negotiations underway with Sri Lanka, currently embroiled in a major financial crisis and civil unrest.

Sources close to Sri Lankan talks say a €960 million deal is on the table for the island nation.

Cape Verde, an archipelago off the coast of West Africa, is waiting to do a deal for €192 million, according to Director of Technology, Climate Change and Natural Resources for UN Economic Commission for Africa (UNECA) Jean-Paul Adam.

The sums being discussed are much larger than ever before.

The average size of the roughly 140 swaps struck over the past 35 years was €2.5 million, the African Development Bank found.

Their combined value to date is €3.5 billion.

This is a fraction of the €390 billion of emerging market sovereign debt that has fallen to distressed levels, analysts at Capital Economics recently estimated

But an agreed swap for Belize reached €533 million last year, providing money to protect the world's second-largest coral reef. It’s too soon to say whether this deal has worked.

What are blue bonds?

These green bonds are not the only debt for nature schemes being worked on.

In 2015 the Seychelles signed a deal following eight years of talks which created the world's first blue bond.

This agreement saw the government commit to protect 30 per cent of its waters - an area the size of Germany - from overfishing and development.

Advocates say that current debt problems, combined with the growing political will and the recent successful swap deals in the Seychelles and Belize, mean a swathe of other countries are now exploring the model.

Ecuadorian President Guillermo Lasso was quoted by a local newspaper in October as saying that the country’s Galapagos swap deal could be wrapped up in four or five weeks.