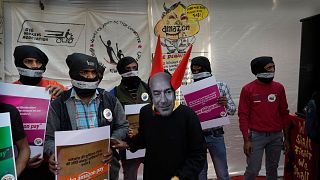 Thousands of Amazon workers have walked off the job today, a mass protest timed to coincide with the lucrative Black Friday sales.

Amazon employees across 35 countries - including Germany, the UK, the US, and Japan - are demanding better working conditions and higher wages as inflation bites.

The ‘Make Amazon Pay’ campaign - coordinated by an international coalition of trade unions - also wants the company to reduce its vast carbon footprint.

The protest will hit the e-commerce giant on one of the biggest retail sales days of the year, says Christy Hoffman, general secretary for UNI Global Union, one of the campaign’s backers.

“It’s time for the tech giant to cease their awful, unsafe practices immediately, respect the law and negotiate with the workers who want to make their jobs better.”

Where are Amazon workers protesting?

The US warehouse staff walkout will be supported by 10 rallies nationwide - including one outside Jeff Bezos’ apartment.

In France and Germany, the CGT and Ver.di unions are spearheading strikes in 18 warehouses.

In the UK, Extinction Rebellion are blockading distribution centres. In India, thousands of workers, street vendors and supporters will rally in over 20 cities. Protests are planned across the globe, from Japan to Dublin to South Africa.

Why are Amazon workers protesting?

The campaign charges Amazon with “squeezing every last drop it can” from “workers, communities and the planet” in the face of the cost of living crisis.

Workers across the world will participate in the protest action. Specific wage demands differ from country to country, but there are “several commonalities,” says James Schneider, communications manager for Progressive International, one of the unions organising the campaign.

“Conditions are different depending on the type of worker and where they are in their supply chain. But there are certain things that are be repeated over and over again,” he says.

“These include attacks on workers trying to organise in trade unions, high levels of surveillance in warehouses to speed up work, and workers not having sufficient break times.”

Pay needs to be increased globally to cope with cost of living, Sylvester said.

“In the UK workers, for example, workers were offered 35p an hour extra at a time when food costs are going up 15 per cent, rent and bills are soaring,” he says.

What is Amazon’s environmental footprint?

The day of action is also being supported by environmental groups. Despite a pledge to fully decarbonise by 2040, Amazon’s carbon footprint increased by 18 per cent last year.

The company emitted at least 71.54 million metric tons of carbon dioxide in 2021, as it expanded its logistics networks to cope with a surge in pandemic-related sales.

The actual figure is higher - the company only count product carbon emissions from the use of Amazon-branded goods, excluding emissions from those it buys from manufacturers and sells to customers.

An Amazon spokesperson said that the company “was not perfect” but “took [its] role and impact very seriously.”

“We are inventing and investing significantly in all these areas, playing a significant role in addressing climate change with the Climate Pledge commitment to be net zero carbon by 2040, continuing to offer competitive wages and great benefits, and inventing new ways to keep our employees safe and healthy in our operations network, to name just a few,” they said.

“Anyone can see for themselves by taking a tour at one of our sites.”