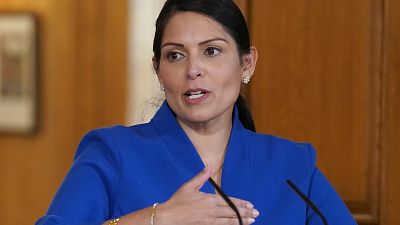 Environmental campaign group Extinction Rebellion (XR) could be designated as a criminal organisation in the UK.

Home Secretary Priti Patel has today written in British newspaper The Daily Mail that she is looking at introducing “primary legislation” to tackle XR’s environmental protests. The move could see the activist organisation reclassified as an organised crime group, meaning protestors who break the law could face up to five years in jail.

The move comes after XR began its new season of global rebellions, including blockades on Saturday outside printing works across the UK which prevented the distribution of The Sunday Telegraph, The Daily Mail, The Sun, and The Times.

“My message to these individuals is clear – as you plot and scheme to curtail our freedoms you are committing criminal acts,” Patel writes, “and be in no doubt, you will face the full force of the law. You will be punished for your actions.”

In connection with the weekend’s action at printing presses, 77 protestors have so far faced criminal charges relating to obstruction of the highway and aggravated trespass at three sites in the UK.

Nick Aldworth, a former counter-terrorism national co-ordinator, said he found the potential legislative changes “spine-chilling”, adding that Priti Patel’s suggestions that she may reclassify organisations like XR as terrorist or organised crime groups “are actually subversions of the intentions of the law.”

“It would create a burden for the National Crime Agency who are doing outstanding work at the moment tackling other issues of societal concern,” Aldworth said in an interview with Sky News earlier today.

XR have released a statement in response to Patel’s threat of criminalisation saying, “According to the government’s own strategy ‘organised crime’ is ‘characterised by violence or the threat of violence and by the use of bribery and corruption’.

“That is hardly an accurate description of the thousands or ordinary people – the nurses, the doctors, the grandparents and others – who take part in Extinction Rebellion’s non-violent protests.”

“They are not criminals,” Abbott told Sky News on Sunday, “they are protestors and activists, in tradition of the Suffragettes and the Hunger Marchers of the 1930s.”

Nuala Gathercole Lam, a spokesperson for XR, added that it was “interesting” to see the UK government responding with such force directly after the weekend’s actions against the media.

“When Extinction Rebellion gets in Rupert Murdoch’s way for a couple of hours, suddenly the media giants, Boris and Priti are all singing from the same song book,” said Gathercole Lam.

“The Government is thinking of reclassifying XR - a loose affiliation of grannies, teenagers, and everyone in between, as ‘organised crime’? This is desperate stuff from an authoritarian Government desperate to please their masters in the billionaire press,” Read told Euronews Living.

“The question I would like to ask the Prime Minister is this: Will he be rounding up his own father as part of this sting operation against XR? Because I’ve sat on XR panels beside Stanley Johnson, as he proudly sported his XR badge…”

What happened at the weekend?

In Broxbourne, Hertfordshire XR rebels built two bamboo structures to create a blockade, while in Liverpool a yellow boat was anchored outside the printing works which produces some of the UK’s biggest newspapers. The rebellion against the media was global too, as international activists dumped a pile of manure outside Rupert Murdoch’s Newscorp offices in Sydney, Australia.

“What we read in the papers is controlled by a handful of powerful billionaires who feed us stories that suit their interests,” read a statement from XR. “The Truth about the terrifying emergency we face has been locked up for too long by corrupt media moguls and dodgy politicians, who jostle for power and undermine our democracy.”

One of the activists arrested was former tabloid journalist Steve Tooze, who joined the blockade outside Newscorp’s printworks in Hertfordshire.

“I was a newspaper journalist for 25 years and I wrote for all of these newspapers – The Sun, The Daily Mail, The Telegraph, The Times. I saw some really brilliant journalists on these newspapers,” says Tooze, “but unfortunately they’re stuck inside a toxic system where they don’t have any choice but to tell the story that these newspapers want to be told.

“Every person who works on them knows what story is and isn’t acceptable for their bosses, and their bosses know what’s acceptable to Rupert Murdoch or to [Viscount Jonathan Harmsworth] Rothermere, or to any of the other five billionaires who run 70 per cent of our media.”

On his decision to leave the media, Tooze explains, “I left that system because I couldn’t bear the way it worked. I feel, as a former insider, that they hold a huge amount of the blame for the situation we’re in today - by not telling the public what’s really happening, they make them think that there isn’t an emergency.”

Tooze adds, “I fear that the way things are going now, my children haven’t got much of a future, and that’s why I got involved with Extinction Rebellion.”