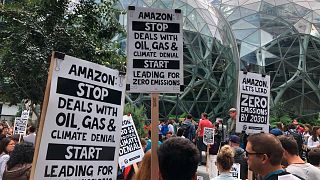 Amazon workers begin to gather in front of the Spheres, participating in the climate strike in Seattle.   -   Copyright  Elaine Thompson/Copyright 2019 The Associated Press. All rights reserved
By Rosie Frost  •  Updated: 08/02/2022

25 of the world’s largest companies are failing to meet their own climate targets, according to a new study.

Pledges made by these corporations only reduce their emissions by an average of 40 per cent - instead of the 100 per cent rate suggested by their “net-zero” or “carbon neutral” claims.

Among those failing to meet their own targets are Nestlé, Amazon, Google and IKEA, based on a report from the NewClimate Institute. Just one company’s net-zero pledge was found to have “reasonable integrity”.

“We set out to uncover as many replicable good practices as possible, but we were frankly surprised and disappointed at the overall integrity of the companies’ claims,” says Thomas Day of NewClimate Institute.

The lead author of the study adds that as pressure to act on climate change piles on, ambitious-sounding claims often lack real substance.

“Even companies that are doing relatively well exaggerate their actions.”

Part of the problem is how these businesses evaluate their emissions, the report’s authors say. Eight of the companies that were looked at exclude ‘upstream’ and ‘downstream’ emissions in their value chain. These are created by activity indirectly linked to their operations and usually account for more than 90 per cent of the carbon the companies produce.

24 of the 25 companies will also likely rely on offsetting to reach their goals, looking to forests and natural environments to absorb their carbon rather than reducing emissions. The NewClimate Institute says this undermines the integrity of their pledges.

“Misleading advertisements by companies have real impacts on consumers and policymakers. We’re fooled into believing that these companies are taking sufficient action when the reality is far from it,” says Gilles Dufrasne from Carbon Market Watch, one of the collaborators from the report.

What do the big companies have to say?

When contacted by Euronews Green, many of the companies welcomed the results of the report but some said they took issue with the methods it used.

“We welcome scrutiny of our actions and commitments on climate change,” says Benjamin Ware, global head of climate delivery and sustainable sourcing at Nestlé. He claims, however, that the NewClimate Institute lacks understanding of his company’s approach and contains “significant” inaccuracies.

Nestlé adds that its net-zero Climate Roadmap has been validated by the Science Based Targets initiative and has engaged with the NewClimate Institute to explain the methodology and data behind its strategy.

IKEA says it also welcomes “dialogue and scrutiny” of its climate commitments and goals, including net-zero targets, adding that this new report is a “constructive addition to this”.

“We continue to support the development of external credible standards for definitions and reporting to eliminate greenwashing and unsubstantiated claims, as well as secure common frameworks to compare progress, including the GHG Protocol and the FLAG project by Science Based Targets Initiative,” the flat-pack furniture chain continues.

“It is essential to have a common, predictable and credible legal framework governing the rules on voluntary green claims.”

The report does identify some promising examples of climate leadership too. It points to Google which, despite pledges having “low integrity”, is developing innovative tools to “procure high-quality renewable energy in real-time.”

This new tech is now also being used by other companies.

“We’re proud of the progress we’re making - in 2020 we achieve 67 per cent carbon-free on an hourly basis across our data centres, up from 61 per cent in 2019," Google told Euronews Green. The company adds that it clearly defines the scope of its climate commitments and regularly reports on its progress.

Companies must face the reality of a changing planet. What seemed acceptable a decade ago is no longer enough

“Our new goal is to achieve net-zero emissions across all of our operations and value chain by 2030.”

Danish shipping company Maersk and Deutsche Post were also found to be making major investments in decarbonisation technology for the transport industry.

But, as Dufrasne concludes, “companies must face the reality of a changing planet. What seemed acceptable a decade ago is no longer enough.”

“Setting vague targets will get us nowhere without real action, and can be worse than doing nothing if it misleads the public. Countries have shown that we need a fresh start when adopting the Paris Agreement, and companies need to reflect this in their own actions.”