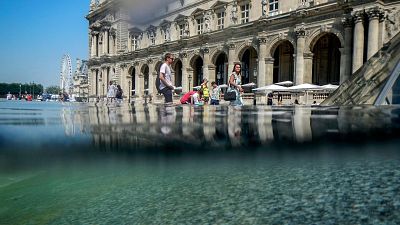 The cooling system that keeps the Mona Lisa looking so unperturbed when Paris is roasting in the summer sun is being expanded to cope with ever more frequent heat waves.

The little-known network underneath the French capital is Europe's biggest ‘urban cold’ system.

Paris City Hall has now signed an ambitious contract to triple the size of this network by 2042 to 252 km - and make it the largest in the world.

Where is the cooling system used?

The system's current 89 km of underground piping cools the city's most emblematic sites, such as the Louvre, the Quai Branly Museum, and even cools down agitated lawmakers by dropping temperatures in the National Assembly.

"Museums have a constant need for cold [temperatures]…in order to preserve their works,” explains Maggie Schelfhaut, communication manager for Fraicheur de Paris - the private company that runs the system. “There are also data centres, for example, which are big consumers of [cool air].”

As Europe’s ongoing heatwaves increase the uptake of air-conditioning in Paris, plans are in place to expand the cooling network to the public sector.

The new contract - which will see the city extend this system to hospitals, some schools and metro stations in 20 years - is intended to mitigate the dangerous effects of global warming.

How does Paris' cooling system work?

The cooling system uses a network of underground water pipes. It functions by injecting the air with chilled water to reduce temperatures.

"We actually use the water of the Seine," explains Schelfhaut.

"It is a resource that allows us to evacuate heat... and change this heat and evacuate it to the Seine."

This sustainable approach sends the heat extracted by the system into the Seine, and in winter uses the cold river water to cool its systems.

How does the cooling system benefit the environment?

"If all the buildings are getting equipped with autonomous installations, it will gradually create a very significant urban 'heat island' effect, and so it will contribute to the warming of the city,” explains Schelfhaut.

“We realised that if we continue to expand [the urban cooling network] we will reach a level of 1°C less than with the proliferation of autonomous installations. And 1°C less in the city centre is a lot.”

Officials in the Louvre, who have benefited from the cooling network since the 1990s, also point to its ecological gains.

"It allows us to benefit from energy with a lower carbon footprint available all year round," says Laurent Le Guedart, the Louvre's Heritage Director. Space-saving is an additional advantage, as the system negates the need for large autonomous cooling units onsite.

Le Guedart adds that the system is a money-saver given the rising cost of energy, as Russia roils the market.

“The energy bill of the Louvre was around €10 million in 2021. With the increasing cost of energy, we are trying to control this as much as possible…[We have] extremely ambitious objectives for reducing our consumption…in order to cushion the shock of the increase in energy prices."

Is the heatwave due to climate change? Experts explain what's going on

Want to escape the heat? Head to Europe's coolest places this week