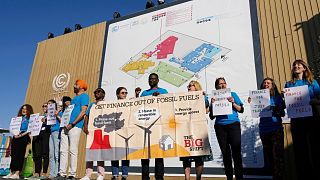 A group of demonstrators participate in an event protesting the use of fossil fuels at COP27.   -   Copyright  AP Photo/Peter Dejong
By Rosie Frost  •  Updated: 10/11/2022

Focus has shifted to finance on the fourth day of COP27.

Today also saw some of the first protests to take place at the conference centre in Sharm El Sheikh and revelations about unreported emissions from fossil fuel giants.

So what happened on the fourth day of COP27?

There have been concerns over protests at COP27 due to Egypt’s laws around public actions and the decision to limit campaigners to a space far outside the conference.

But today saw a group of around 50 activists protest in the Blue Zone - the area officially inside the summit - to call for an end to oil and gas projects.

Organised by Netherlands-based organisation Recourse they chanted, sang and held signs with slogans including “Get Finance out of Fossil Fuels” and “No Gas.”

Despite protests not being allowed at the conference centre, we are likely to see more actions taking place in the coming days as campaigners refuse to use the designated area.

Security showed no signs of bringing an end to the gathering of activists this morning as delegates looked on and took pictures.

A report released at COP27 today revealed that emissions from fossil fuels could be up to three times higher than oil and gas companies claim.

The research from the NGO Climate TRACE tracked emissions from 72,612 independent sources. Its authors used satellite technology to detect often unreported emissions like those from methane leakage or ‘flaring’ - the practice of burning unsellable gas.

It found that half of the world’s biggest polluters are oil and gas fields.

“The climate crisis can, at times, feel like an intractable challenge - in large part because we’ve had a limited understanding of precisely where emissions are coming from,” Al Gore, former US vice president and a founding member of Climate TRACE said at the conference in Egypt.

Gore added that detailed data about emissions enables us to act decisively and prioritise efforts to achieve deep cuts to greenhouse gases - a vital step to prevent climate catastrophe.

UN Secretary-General António Guterres added that there would be dangerous consequences to polluters “greenwashing and cheating” by underreporting their impact.

“The climate crisis is in front of our eyes - but also hidden in plain sight. We have huge emissions gaps, finance gaps, adaptation gaps,” he said.

“But those gaps cannot be effectively addressed without plugging the data gaps. After all, it is impossible to effectively manage and control what we cannot measure.”

One year on, a report from Global Witness has found that these firms - including finance giants like Blackrock and Deutsche Bank - are still investing €8.5 billion in companies at risk of causing deforestation.

So far there has only been a 3 per cent reduction in investments linked to clearing the world’s climate critical forests by members of GFANZ.

“Despite the huge fanfare around GFANZ, its members’ efforts on deforestation as a whole are woefully inadequate,” says Veronica Oakeshott, forests campaign leader at Global Witness.

She adds that protecting forests is vital to reaching net zero - something that the alliance itself recognises.

“A year on from COP26, GFANZ membership is at risk of becoming little more than a badge to be worn by banks and financiers, who continue to plough money into practices that are destroying our forests.”

In September, leaders of the alliance including former Governor of the Bank of England Mark Carney wrote to members urging them to stop funding deforestation. They warned that “the world will not reach net zero by 2050 unless we halt and reverse deforestation within a decade”.

Coral reefs have long drawn visitors to the resort town of Sharm El Sheikh. But these rich, diverse ecosystems are more than just a backdrop to climate negotiations in Egypt.

The fate of coral reefs is one of several ‘tipping points’ that could push us into climate catastrophe, according to experts. And Egypt’s reefs are particularly important.

They act as ‘coral refugia’ or reefs in cool climate spots that offer the global community the chance to safeguard these ecosystems. They can also act as seedbanks that could help restore degraded reefs in other parts of the world.

Now the United States Agency for International Development has announced a major new fund to support this local ecosystem. At COP27, it pledged almost €15 million to the Global Fund for Coral Reefs.

5. Africa needs trillions to address the devastating impacts of the climate crisis

Egyptian Environment Minister Yasmine Fouad told COP27 today that Africa needs up to $41.6 trillion (€41.4 trillion) to address the devastating impacts of climate change by the end of the decade.

“bridge the gaps between the needs and climate funding”.

The conference in Egypt has been dubbed by some as the “African COP,” where positions from countries on the continent should be taking centre stage.

Africa is particularly vulnerable to climate change. According to NGOs, staple crops and fish harvests are expected to decline in the coming years.

And an estimated 116 million people in Africa could soon face problems associated with rising sea levels.

But the world’s richest nations have already failed to deliver a $100 billion-a-year pledge for climate change funding.

While there have been gestures towards cooperation between the Global North and South, it remains to be seen whether Africa’s voices will truly be heard at COP27.