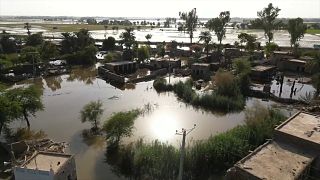 Climate change is outpacing the capacity of developing nations to cope with its devastating impacts, the Pakistani Prime Minister told COP27 on Tuesday, as his country reels from historic floods.

Talks at the UN climate conference in Egypt have been dominated by calls for wealthier nations to fulfil pledges to financially help poorer nations green their economies and build resilience.

"The world is burning up faster than our capacity for recovery," Prime Minister Shehbaz Sharif warned in his speech before the summit in the Red Sea resort of Sharm el-Sheikh.

"The current financing gap is too high to sustain any real recovery needs of those on the frontlines of climate catastrophe."

Sharif argued Pakistan exemplifies the extreme vulnerability of nations in the developing world struggling to grow their economies while confronting a perfect storm of inflation, soaring debt and energy shortages -- all compounded by global warming.

Catastrophic floods in Pakistan in August coming on the heels of a crippling two-month heat wave earlier in the year upended the lives of 33 million people and inundated a third of the country, he said.

"Raging torrents" from melting glaciers in northern Pakistan ripped up thousands of kilometres of roads and railway tracks, Sharif added.

The floods, which also swamped vast areas of key farmland, incurred damages exceeding $30 billion (€29.9 billion), according to the World Bank.

Developing nations shouldn't have to take on this 'gigantic task' alone

"We have redirected our meagre resources to meet basic needs of millions of households affected by these devastating floods," Sharif said. "And this all happened despite our very low carbon footprint."

A lightening-rod issue at COP27 is whether or not wealthy nations should commit to a separate financial facility for unavoidable impacts - from storms, heat waves and sea level rise, for example - known as "loss and damage".

"How on earth can one expect from us that we will undertake this gigantic task on our own?" Sharif said.

At a Monday meeting with Sharif, UN chief Antonio Guterres said the world needs to rethink the international financial system to provide debt relief to countries battered by climate impacts.

Watch the video above to see the Pakistani Prime Minister's comments at COP27.