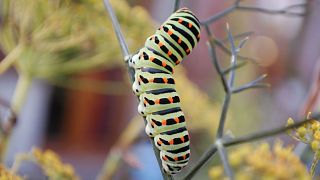 Caterpillars are an unrecognised driver of carbon emissions, according to a new study.

Scientists at the University of Cambridge focused on mass outbreaks of leaf-guzzling caterpillars and discovered that they were having a harmful effect on the environment.

The little creatures are known for being ‘hungry’ (as the popular children’s book says) and it turns out this is very accurate. They can eat an enormous amount during a life cycle stage that typically lasts several weeks. Some consume 27,000 times their body weight during their lifetime.

But the problem is caterpillars eat so many leaves that they reduce the amount of plants there are to absorb CO2 from the atmosphere.

And that’s not all. As well as their leaf-munching habits, their poo emits carbon dioxide-releasing bacteria once the leaves come out the other end - so it’s a double whammy.

Many caterpillars live by lakes and when their poo or “frass” (the technical term for caterpillar excrement) washes into the water, it acts as a fertiliser for certain microbes which release carbon dioxide into the air.

"These insects are basically little machines that convert carbon-rich leaves into nitrogen-rich poo. The poo drops into lakes instead of the leaves, and this significantly changes the water chemistry, ” says senior author of the paper, Professor Andrew Tanentzap, at the University of Cambridge's Department of Plant Sciences.

“We think it will increase the extent to which lakes are sources of greenhouse gases.”

'From a climate perspective, they're pretty bad'

The study, published in Nature, found that in years with insect outbreaks, the leaf area of forests was reduced by an average of 22 per cent. At the same time, nearby lakes contained 112 per cent more dissolved nitrogen.

To get their results, researchers combined 32 years of government data from insect outbreak surveys and lake water chemistry in 12 lake catchments across Ontario, Canada. This is believed to be the most extensive study ever undertaken into how insect outbreaks impact freshwater carbon and nitrogen dynamics.

“It's just amazing that these insects can have such a pronounced effect on water quality," says Sam Woodman, a researcher in the University of Cambridge's Department of Plant Sciences and first author of the report.

“From a climate perspective, they're pretty bad - yet they've been completely overlooked in climate models."