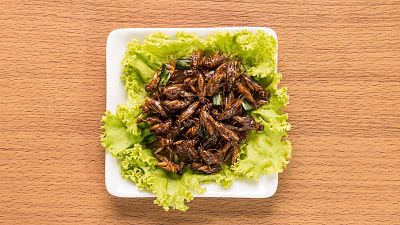 Eating insects has various nutritional and environmental benefits but consumers in Western countries still have a hard time fighting the 'yuck' factor.

As Earth's growing population puts more pressure on global food production, insects are increasingly seen as a viable food source. The buzz around this alternative protein source has been building in Europe as the EU's Food Safety Agency has authorised the selling of dried yellow mealworm as a novel food as of June 2021. It is the first insect food approved by the EU.

Edible insects are rich in protein yet can be raised much more sustainably than beef or pork. Around the world, 2 billion people in 130 countries regularly eat insects.

European entrepreneurs, however, need to find creative ways to make mealworm and cricket appetizing. Tiziana Di Costanzo holds insect cooking classes at her West London home where she also raises the critters in a backyard shed with her husband, Tom.

We may end up eating more insects indirectly rather than finding them our plates, though, as the market shows the most promise is for feeding animals. The EU approved insect protein as feed for fish farming in 2017. The U.S. Food and Drug Administration approved it for chicken feed in 2018, while EU approval for poultry and pigs is due later this year.

In the meantime, the global edible insect market is poised to boom, according to investment bank Barclay's. Citing data from Meticulous Research, it forecasts the industry will grow to €6.7 billion ($8 billion) by 2030 from less than €850 million ($1 billion) in 2019.

Click on the video to learn more about edible insects.