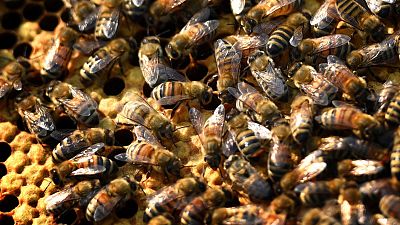 Bee populations around the world are suffering from the spread of a deadly virus that eats away at their wings.

Deformed wing virus (DWV) was first detected 40 years ago, but a new strain that emerged in the Netherlands in 2001 is on the rise according to scientists.

Honeybees are most afflicted by the virus, which is transmitted by a parasitic mite called Varroa Destructor.

"These mites not only transmit viruses between honeybees, they also eat the bees' tissues," explains Professor Robert Paxton, a zoologist from Germany’s Martin Luther University Halle-Wittenberg (MLU) which led the new study.

After analysing data on cases of DWV from the past 20 years, the researchers found that the virus mutation has already replaced the original strain in Europe. It is spreading quickly and now threatens bee colonies around the world.

Australia is the only major landmass on which the virus has not been detected, likely because the Varroa mite has not yet been able to spread widely there.

The plight of bees is well documented, with habitat destruction, pesticide use and climate change all contributing to their decline. Nearly 1 in 10 wild bee populations across Europe are facing extinction, according to environmental charity Friends of the Earth.

Notwithstanding all the ways humans are pushing these crucial pollinators to the brink, Paxton says that the "Deformed wing virus is definitely the biggest threat to honeybees.”

Having evaluated some 3,000 datasets for honeybees and large earth bumblebees, he adds that laboratory studies show the new variant kills bees faster and is more easily transmitted.

Shrunken wings are the most obvious symptom of both DWV-A (the original strain) and the DWV-B variant. But the virus attacks bees from the inside out.

Short, rounded abdomens and paralysed legs are other signs that it has taken hold, after which bees have less than 48 hours to live. Symptomatic insects are typically expelled from the hive.

There are various ways to protect honeybees from the Varroa mite and the virus, explains Paxton.

"The most important thing is to pay attention to hygiene in the hive. Here, simple measures can help to protect not only one's own colony from Varroa, but also wild bees that no one else is looking after.”

Evidence of the virus was also found in samples taken from bee species that aren’t commonly kept commercially like large earth bumblebees.

"Whether the virus will have similarly devastating consequences in bumblebees and other wild bees remains uncertain. So far, commercial bumblebee colonies infected with the virus are not dying at a significantly higher rate," adds Paxton.