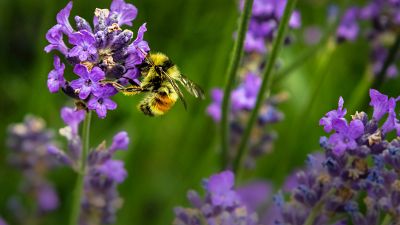 An unlikely winner at a UK flower show has provoked major conversations around gardening practices and pollinator populations.

The “Weed Thriller”, created by Sunart Fields, won the gold medal at the Tatton Flower Show in Cheshire. Described as a ‘distilled version’ of the rewilded fields at their former dairy farm in Derbyshire, the display was a mixture of native plants which the creators feel are wrongly categorised as weeds by many gardeners.

After winning the prize, horticulturist Sandra Nock told the BBC, “Without this kind of multi-layer native planting, a lot of our insects and birds just wouldn’t cope.”

The plot contained ragwort, hawthorn and ladythorn - all ‘weeds’ native to the UK.

Concerns over bee populations have been high among governments and citizens in recent years as climate change and habitat destruction threaten our nectar-loving friends.

Intensive agriculture practices such as monocropping and pesticides are bad for the bees - however, while this is the main contributor to bee population decline there are things you can do at home (literally).

Suburban neighbourhoods full of manicured lawns can be as bad for bee populations as vast expanses of concrete, with grass providing no opportunity for pollination and even emitting more carbon than it sequesters thanks to the effort that goes into maintaining it.

Campaigns have sprung up such as ‘no-mow May’ which encourages people to put away their lawn mowers and allow their gardens to cultivate pollinating plants for bees and other hovering insects.

Other alternatives involve seeding a blend of grass including fescues rather than turf or planting edible plants that bees love to pollinate.

Recently, concerns were raised over the growth in urban beekeeping, with well-intentioned citizens keeping hives of honeybees to increase local bee populations inadvertently threatening other species.

A better way to increase bee populations is by creating pollinating habitats and turning your garden into a native pollinator paradise.

A great way to achieve this is to ensure you have a mixture of flowering plants that bloom in different seasons and always plant flowers which are native to your country or area (if you’re in France stick to native western-european species for example).

Native plants are easy to grow and are often pest resistant, not to mention they have evolved alongside native pollinators so the two are quite literally made for each other. In addition to these, native species of flowering trees (cherry, apple and willow for example) are great for bees and other pollinators as they have multiple flowers at once.

Diversity is key: ensure a mixture of colours and shapes in your pollinator attracting plants and above all never, ever use pesticides.

Finally, follow the Sunart Fields example and leave the weeds where they are. Dandelions may be unsightly but they are often the first flowers of the year for bees to land on.