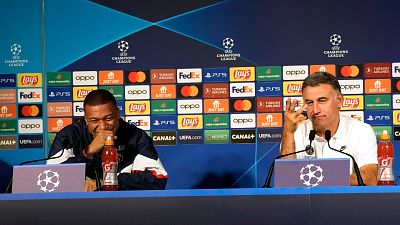 A French football team’s coach has come under fire for laughing off the team using private jets.

Christophe Galtier, coach of Paris Saint-Germain (PSG), is at the centre of the controversy after the team were criticised for using a jet to take a short flight to a game in Nantes over the weekend.

Galtier and PSG player Kylian Mbappé burst out laughing after being asked about the journey at a news conference on Monday.

“This morning we talked about it with the company which organises our trips and we're looking into travelling on sand yachts,” he quipped back.

When Mbappé was asked about his views on the topic, he said that he didn’t have any.

Parisian Mayor, Anne Hildalgo shared a video of the press conference on Twitter, responding “No, but it's not okay to answer stuff like this???? Wake up guys???? This is Paris”.

French Sports Minister Amélie Oudéa-Castéra wrote: “we’re used to more relevant and responsible answers from you,” asking Galtier if they needed to talk about his response.

Why is Paris Saint-Germain under attack for its use of private jets?

The debate started on Saturday when videos and images were shared by PSG on social media showing Mbappé and other players boarding a private plane to make the short 380-kilometre hop from Paris to Nantes.

A senior official at French train operator SNCF, Alain Krakovitch, tweeted back at PSG after news of the short private jet trip emerged.

“Paris-Nantes is less than two hours by TGV (high speed train). I re-re-renew my proposal of a TGV offer adapted to your specifications, for our common interest: security, speed, services and eco-mobility,” Krakovitch wrote.

PSG told The Associated Press that there weren't any late night TGV trains it could have taken back to Paris after the match which would have forced the team to spend the night in Nantes.

“From June to August, Messi made 52 flights with his private jet, amounting to 1,502 tonnes of CO2,” they wrote in a Twitter post.

“That’s as much as one French person is responsible for in 150 years.”

The news also comes as the country looks to introduce restrictions on short flights by private jet.

“We have to act to regulate flights on private jets,” he told Le Parisien, with heavy taxation and restrictions on these flights more likely than an outright ban.