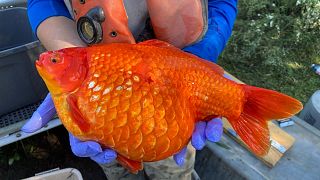 If you ever wondered what would happen to your goldfish in the wild, then take a look at these giant examples. Pet goldfish released into stormwater ponds are becoming a supersized problem in Canada.

The fish, native to East Asia, are ‘intermediate growers’, meaning they can continue to grow throughout their lifetime and will grow larger if conditions are right.

While it is a myth that goldfish only grow to the size of their tanks - living in an enclosure that is too small for them causes the fish stress, which stunts growth - in the right conditions, goldfish will grow bigger than those you commonly see in pet shops.

By releasing hormones, they are even able to regulate their size and those of the fish around them, depending on the availability of natural resources. And with such abundant food sources in Canada’s waterways, they are growing to epic proportions.

Where are the invasive goldfish living?

Scientists from Fisheries and Oceans Canada have been tracking the movements of invasive goldfish for a number of months now using acoustic tags - a tiny sound-emitting device that is attached to the fishes' belly.

In October 2021, biology professor Nick Mandrak from the University of Toronto Scarborough discovered over 20,000 goldfish living in a stormwater pond outside of Ontario.

“These ponds are extreme environments,” Mandrak told the university’s magazine.

“Not only is the water shallow, oxygen levels are extremely low and temperatures can reach 30-plus degrees in the summer.”

It is their ability to survive in such harsh environments which is leading to large shoals in the wild. Goldfish reproduce rapidly too, and this, coupled with their ability to thrive in water with low oxygen levels, is worrying scientists.

As water oxygen levels fall due to climate change, they fear the fish will have a competitive advantage over native species, potentially leading to monocultures, as Mandrak points out,“**Are we creating ‘super-invaders’** that are likely to have incrementally greater impacts in the wild under climate change?”

Unlike many fish species, the goldfish can survive in water with toxic blue-green algae, and may even be helping it to grow.

Unlike many fish species, the goldfish can survive in water with toxic blue-green algae, and may even be helping it to grow.

How are these super-invaders affecting native fish?

As well as being quick breeders, goldfish are also big eaters. Large schools of the fish can quickly destroy aquatic habitats by tearing through plants.

By tracking these goldfish, we’ve learned that they’re breeding in Hamilton Harbour and targeting key spawning sites for native species like Northern Pike? - tearing up aquatic plants for food and clouding the waters with their waste. pic.twitter.com/KYb9JJrAfg

As well as stormwater ponds, the fish have been found in Ontario’s Hamilton Harbour, a key spawning site for native fish species like Northern Pike. Scientists fear they could even end up in Canada’s Great Lakes in the future if their numbers are not reduced.