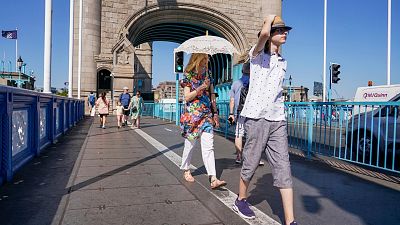 A woman shelters from the sun holding an umbrella, as she walks on Tower Bridge, in London.   -   Copyright  AP Photo/Alberto Pezzali
By Tim Gallagher  •  Updated: 12/08/2022

The UK is facing yet another heatwave this weekend with warnings in place for extreme weather.

Despite being cooler than the record-breaking temperatures of 40.3C reached in July, conditions could be more dangerous as the heat gradually builds up over a number of days.

Experts from the UK Health Security Agency have warned Brits to look out for older people, those with existing health conditions and children.

Forecasters have said that this spell of hot weather could last longer than the last heatwave in the UK because of something called a heat dome.

What is a heat dome?

Temperatures in some places have created what is known as a heat dome.

This is when the atmosphere traps hot ocean air like a lid or cap. Hot air expands vertically into the atmosphere and high pressure pushes it toward the ground. It has nowhere to escape and compresses trapping even more heat underneath.

Winds are usually able to move high pressure around but with the dome stretching far into the atmosphere, these weather systems become almost stationary.

On top of that, the ground begins to warm up, losing moisture and increasing the chance of fires. A heat dome can lead to temperatures well above what is normal.

Since 1950 heatwaves have increased in length and frequency all over the world, as shown in a study published in 2020.

The study, done by scientists from UNSW Sydney and UNSW Canberra, found that the Mediterranean has experienced an increase of 2.5 heatwave days per decade since 1950, and the Amazon had an extra 5 and a half in the same period. The worst increases globally have taken place since 1999.

Heatwaves increase the chance of prolonged droughts and the risk of wildfires. There are economic consequences too, such as in Australia where $6.2 billion (€4.3 billion) a year is lost due to heatwaves.

The consequences will be even more severe for cities, where the combination of buildings plus pavement plus concrete creates an ‘urban heat island’.

In Europe 75 per cent of the population lives in urban areas, making heatwave mitigation a pressing concern. Creative solutions can be found. - in Portland libraries are being used as cooling centres. But what are the best ways that cities can heatproof?

We’ve listed the top three strategies for reducing the effects of heatwaves and added three ways that you can handle the heat. Our personal methods all have an environmental focus - sorry guys, turning up the air con isn’t an option!

What can your government do?

A study published in 2019 found that increasing tree cover in cities could dramatically lower temperatures. Whereas surfaces like roads absorb heat, trees cool their surroundings through transpiration: absorbing water through their roots and releasing it into the atmosphere. It was found that for the best effects canopy cover must be 40 per cent.

Barcelona - already famous for its tree cover at 25.2 per cent - has a 20 year master plan to grow that to 30 per cent by 2037. A wise move as southern Europe is expected to suffer from increasing heatwaves as climate change increasingly takes hold.

Trees aren’t the only plant-based solution on the block with an increased focus on adding vegetation to buildings as a way of cooling them down. Like trees, plants reflect the sun’s rays - a benefit if they are placed over heat absorbing concrete - and cool the atmosphere through transpiration.

Urban planting schemes are underway in Paris and designs have been pioneered in Italy by architect Stefano Boeri.

While fountains may seem like a luxury they can have amazing cooling effects in urban environments.

The City of London's adaptation plan includes building more fountains and in Thessaloniki, Greece, Chrimatistiriou Square has a bioclimatic design with water features to provide relief from the sweltering Mediterranean heat.

What can you do to keep cool during a heatwave?

Clothes made from fabric containing microplastics release harmful chemicals into the ocean when washed and can harm marine life.

The good news is that breathable clothing made from natural fibres like cotton and linen can keep you cool and is better for the fish. While far from perfect in terms of production, natural fibres do biodegrade and their weaves absorb sweat and allow air circulation around the body, helping to keep you cool.

First things first - ditch the coconut water. While this may seem like a natural beverage containing many hydrating electrolytes, coconut farming is deeply damaging to tropical biodiversity.

Switch to the far more ethically farmed peppermint tea. Mint can be grown in many different climates and can even be sourced locally or grown in your back garden. A peppermint teabag in a glass of cold water will cool you down as the natural menthol will stimulate cool receptors in the body.

Remember when I said turning the air con up wasn’t an option? I meant it. A much more environmentally friendly option would be to create a cross breeze using a fan and an open window.

Position the fan (which uses less electricity) across the room from the window and the cooling airflow created will make sure you get a good night's sleep. For really hot nights place a frozen water bottle in front of the fan, and then you can enjoy a cold bottle of water when you wake up in the morning.