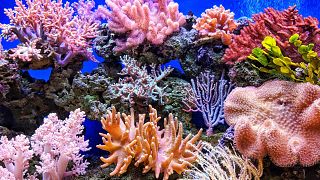 The vast majority of the Earth’s coral reefs could be dead within three decades unless prompt action is taken to reduce emissions, according to a new report.

Researchers at the University of Leicester issued a dire warning that it may already be too late to save these important ecosystems which are home to thousands of species. This could also cause a huge economic crisis for half a billion people who depend on the reefs for jobs and income.

An international team of environmental scientists have published recommendations to conserve the world’s coral reefs, as 90 per cent could vanish in the next 30 years.

The Vibrant Oceans Initiative revealed their findings on the future of endangered habitats on 13-14 April at Our Oceans Conference in Palau, in the Micronesia region in the western Pacific Ocean.

The research shows that some coral reefs have the ability to recover or resist thermal stress faster than others.

“This is a major new research direction - to find those locations and protect them before they are gone,” Zinke explains.

Where are the most resilient coral reefs located?

The Vibrant Oceans group identified 50 reefs that were most likely to survive climate change. These are found in the Indian and Pacific Oceans, the Caribbean as well as east Africa.

Important work needs to be carried out on these areas which are home to resistant and fast-recovering reefs. Scientists are urging that there needs to be more research into reefs that have shown the ability to recover some life after suffering coral bleaching, or have demonstrated resistance to the effects of climate change.

According to a recent IPCC (Intergovernmental Panel on Climate Change) report, corals with the highest potential to escape destruction from ocean spikes in temperature are along the northern shoreline of Cuba. Other sites are around the Bahamas, Dominican Republic, Guadeloupe, Haiti, eastern Jamaica, and the US state of Florida.

Even if global warming is kept within 1.5 degrees above pre-industrial levels, around 90 per cent of the Earth’s coral reefs could disappear within three decades.

Why are coral reefs such a vital ecosystem?

Coral reefs are huge animal colonies that secrete calcium carbonate (limestone). There are more than 800 different species of coral reefs, which form colonies. A single coral or polyp, has a simple, tubular body with a ring of stinging tentacles.

They have a central mouth that filters food, and 90 per cent of their nutrition comes from microscopic algae called "zooxanthellae." This algae is what gives coral reefs with their extraordinarily vivid colours which range from shades of green, brown, pink, yellow, red, purple or blue.

What will happens if the world’s coral reefs die?

These amazing structures act as important barriers to coastlines, and protect strong waves that can erode beaches. Fiercer seasThese cause structural damage to ocean-front buildings, as well as being a safety hazard, as the frequency and intensity of storms increases.

Reefs are known as the ‘rainforests of the sea.’ Although they cover less than one per cent of the ocean, these ecosystems are home to 25 per cent of all marine life, which accounts for more than one million species.

Corals can sense when ocean temperatures exceed a dangerous threshold

Over the past few years, reefs around the globe have experienced coral bleaching as the result of higher temperatures caused by greenhouse gas emissions, according to the International Union for Conservation of Nature (IUCN).

A rise of 1–2°C in marine temperatures over a few months can lead to bleaching, which turns the corals white. The bleaching may lead to the death of vast areas of coral. The Great Barrier Reef suffered from catastrophic bleaching in 2016, leading to the death of almost 50 per cent of its corals.