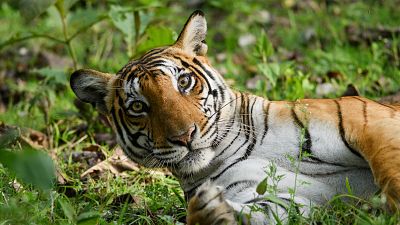 Five new species have been chosen as the new ‘Big 5’ in a bid to replace hunting with wildlife photography.

The ‘Big 5’ is an old term used by trophy hunters in Africa for the five most-prized and dangerous animals to shoot and kill: elephant, rhino, leopard, Cape buffalo and lion.

Now more than 250 of the world’s nature photographers, conservationists and wildlife charities have come together to reclaim the term and use it to protect, rather than harm, these animals.

“So many face threats to their survival from issues such as poaching, habitat loss and climate change,” says renowned conservationist Dr Jane Goodall. “A million species are at risk of extinction. If we work together, we can stop this happening. There is always hope. Change is possible if we each play our part.”

All five chosen animals are keystone species, meaning they are essential for maintaining the ecological balance of their habitats, by playing vital roles in the food chain. Without these animals, there would be less biodiversity and increased risk for other species’ survival too.

They were voted for by over 50,000 wildlife lovers around the world.

Find out who made the cut below.

These symbols of strength and courage have actually been officially labelled as vulnerable on the International Union for the Conservation of Nature (IUCN) Red List of Threatened Species, and in West Africa they are critically endangered.

Human activity, poaching and poorly managed trophy hunting have seen their numbers tumble from an estimated 100,000 a century ago to just 20,000. Conservation groups say we need to act now to save these magnificent creatures.

“I’m so excited lions are in the New Big 5 because lions need all the attention they can get. They’re in serious trouble. The large prides I used to see as a child are disappearing,” says Dr Shivani Bhalla founder of Ewaso Lions.

“I hope that by coming together and giving lions the attention they deserve, we can address these threats and ensure lions are free to roam across Africa’s spectacular landscapes.”

In 1930, as many as 10 million wild elephants roamed Africa. Now there are only around 455,000 wild elephants in the world due to the ivory trade, poaching and habitat loss.

There are three species of elephant: African Savanna, African Forest and Asian. In March the Savanna elephant was listed as endangered and the Forest elephant as critically endangered by the IUCN. An estimated 55 African elephants per day are still being killed by poachers - one every 26 minutes.

“We’re currently experiencing the worst spate of species die-offs since the loss of the dinosaurs 65 million years ago,” explains wildlife photographer Marsel van Oosten, “but unlike those past mass extinctions, the current crisis is almost entirely caused by us: humans.”

The area around Chernobyl is a prime example of what can happen when humans stop interfering and give animals space. In the aftermath of the Chernobyl nuclear disaster the surrounding area became illegal to live in, and in human’s absence nature has flourished.

Wild tiger numbers dropped by more than 95 per cent since the beginning of the 20th century. There are now only around 3,159 left and the IUCN has classified them as endangered. Poaching, loss of habitat, illegal trade of tiger parts, human activity and climate change are the main causes for this decline.

However, there is hope as conservation efforts are beginning to have an effect and for the first time in conservation history their numbers are growing.

Polar bears are facing a significant threat due to climate change. Polar bears live in icy areas like the Arctic and as they decrease in size because of global warming so too will their habitat. As a result global polar bear numbers are projected to decline by 30 per cent by 2050.

There are currently only around 26,000 in the wild and they are already labelled as vulnerable by the IUCN so this will have a detrimental effect on the species.

Krista Wright, the Executive Director of Polar Bears International, believes that “by taking action on climate change, we’ll not only ensure the polar bear’s future, but help people too. A future that supports polar bears will be a future that’s better for all of us.”

Last but not least on the list are gorillas.

A combination of poaching and disease has caused the gorilla to be critically endangered according to the IUCN. The WWF says that even if all of the threats to western gorillas were removed, scientists calculate that the population would require some 75 years to recover.

The ‘New Big 5’ shines a light on the impact our own actions are having on the creatures we share this world with. Yet they are just the tip of the iceberg. A 2019 UN report found that 1 million animal and plant species are now threatened with extinction.

“Conservation works,” adds Jon Paul Rodríguez, Chair of the IUCN’s Species Survival Commission (SSC). “We just need to do more of it.”