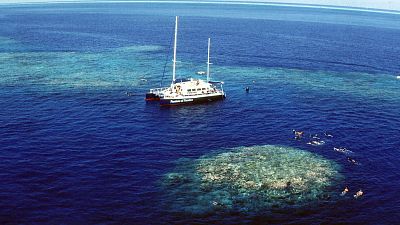 Australia's Great Barrier Reef has lost more than half of its corals over the past three decades due to rising sea temperatures, a new study has found.

"The decline occurred in both shallow and deeper water, and across virtually all species — but especially in branching and table-shaped corals," study co-author Professor Terry Hughes from the ARC Centre of Excellence for Coral Reef Studies in Queensland, said in a statement.

"These were the worst affected by record-breaking temperatures that triggered mass bleaching in 2016 and 2017," he added.

Published in the Proceedings of the Royal Society B journal, the study compares the current state of the Great Barrier Reef — the world's largest coral reef system — to historical baselines established in 1995.

The branching and table-shaped corals are particularly important for fish and a decline of those, in turn, diminishes fish abundance and the productivity of vital reef fisheries.

"A vibrant coral population has millions of small, baby corals, as well as many large ones — the big mamas who produce most of the larvae," lead author Dr Andy Dietzel, said.

"Our results show the ability of the Great Barrier Reed to recover — its resilience — is compromised compared to the past, because there are fewer babies, and fewer breeding adults," he went on.

The study authors stressed that more data on the demographic trends of coral is "urgently needed".

They also warned that "there is no time to lose — we must sharply decrease greenhouse gas emissions ASAP."

The Great Barrier Reef suffered mass coral bleachings in 2016 and 2017 because of "unusually warm water temperatures" which were the result of "the exceptionally strong 2015-2016 El Nino, compounded by increasing baseline temperatures due to global warming," the Australian Institute of Marine Science said at the time.

Bleaching was also recorded in 1998 and 2002 — and reefs had somewhat recovered — but the proportion of reefs experiencing extreme bleaching in 2016 was over four times higher than during the past two events.

Special report: What's really happening in the Arctic and Siberia?