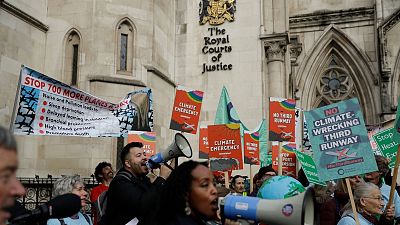 As the 2020s progress, and dates set by climate pacts come and go without the meaningful action needed to avert the worst of the crisis, more and more people are turning to legal avenues.

In the UK, the government is facing a fresh wave of litigation over its net zero strategy, which lawyers argue illegally fails to include adequate policies to cut emissions.

If an individual breaks the law, we assume it can be used to make them change course, or at least stop the offender in their tracks. So why not our leaders - when their inactions can be deadliest of all?

Across the world, groups are taking governments and corporations to court to ensure that they are actively working towards climate targets. Claimants range from school children like Anjali Sharma, fighting to stop the Australian government approving a new coalmine, to big NGOs.

“All the levers of change are on the table,” Christiana Figueres told Euronews Green. “And so you have financial shifts, you have policy, you have technology, and litigation.

“Litigation is going to continue, especially because we've already seen several successful cases. It's part of keeping us to account.”

Here we will be keeping track of the climate court cases that matter in Europe, both pending and successful.

Norwegian climate activists have taken their government to the European Court of Human Rights over their planned continuation of oil and gas exploration in the arctic.

The case, brought by six individuals all in their 20s and backed by Greenpeace and Young Friends of the Earth, argues that the fossil fuel drilling deprives young people of their future.

One activist is part of the Indigenous Sámi people, and says that climate change poses a particular threat to their way of life.

The complainants took their case to the ECHR after domestic courts ruled in favour of the government, which owns majority shares in Equinor, the fossil fuel firm which is planning to increase production of gas and oil over the next five years.

The Norwegian government now has until 13 April to respond to activists’ charges.

The UK government is contending with a number of legal challenges this year. Court papers were filed today (12 January) by ClientEarth which claims the failure to meet legal carbon budgets would contravene a vital part of the Human Rights Act: young people’s right to life and family life.

Britain’s net zero strategy was published in October but lacks detail on how the country will get there by 2050, according to ClientEarth lawyers. Instead, it points to speculative technologies like extracting CO2 from the air. Friends of the Earth has also launched a separate challenge over the government’s “lacklustre” climate commitments.

It comes hot on the footsteps of the Paid to Pollute campaign, whose claimants took the government to court for wasting billions on propping up the oil and gas industry. They are awaiting the judge’s decision after the hearing wrapped up in the High Court last month.

Shell were ordered to reduce their carbon emissions by 45 per cent after a ruling against them in the lower court of the Hague last year.

After a case filed by Friends of the Earth Netherlands and other co-plaintiffs the company was ordered to make the changes by 2030. The case is unique in that policy change was sought rather than compensation.

Activists shed tears of joy outside court after the historic win against the purported biggest polluter in the Netherlands, however the ruling only applies in the territory itself.

This child-led climate case was fast-tracked to the European Court of Human Rights due to its urgency, with a hearing expected to take place in 2022.

The plaintiffs - aged between eight and 21 - argue that the effects of climate change affect their right to life.

In a challenge against 33 governments - all the EU countries plus Tukey, Ukraine, Switzerland, UK, Russia and Norway - the young people also argue that they are victims of discrimination based on their fate to suffer the consequences of climate change longer than their older counterparts.

Portugal is among the parts of southern Europe that will suffer the most from droughts, fires and damage to agriculture due to climate change.

This case, started by Friends of the Irish Environment, saw the Irish government taken to court over the inadequacy of their climate policy.

The ‘National Mitigation Plan’ was created in 2017 but activists claimed it violated Irish law and the European Convention on Human Rights.

In a unanimous decision ruling in favour of the activists, the seven judges of the Supreme Court ruled the plan “lacked the specificity to comply with the law” and told the government to “act now” to protect citizens from climate change.

The Polish government saw five cases brought by citizens against them in regional courts over their “regressive” climate stance in 2021.

One such plaintiff is a business owner from Poland’s central region which suffers severe droughts.

The region has seen crop failures and disruption to travel, and business owner, Monika Stasiak, is afraid for the region and her son’s future.

Launched by environmental group Klimaatzaak, more than 58,000 citizens joined this lawsuit and the court ruled that they had a right to be heard.

On 17th June 2021, the government was found guilty of negligence in its policies to tackle the climate crisis. The court found that "by refraining from taking all necessary measures to prevent the effects of climate change detrimental to the lives" of the complainants, they had breached the European Convention on Human Rights.

But to the disappointment of campaigners, it decided not to impose binding emissions reduction targets on federal or regional governments.