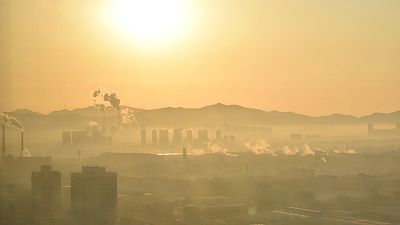 Smog over the Chinese city of Yantai.   -   Copyright  Götz Friedrich from Pixabay
The opinions expressed in this article are those of the author and do not represent in any way the editorial position of Euronews.
By Marthe de Ferrer  •  Updated: 06/02/2021

It feels as though every time there’s a new study about the US or EU needing to reduce carbon emissions, there’s a voice which pops up and asks ‘but what about India and China?!’

From anonymous accounts on social media to global leaders, pointing the finger at these two particular nations has become a common retort when discussing the need for climate action.

During the second US presidential debate last year, Donald Trump was challenged over his decision to leave the Paris Agreement. He responded by declaring, “Look at China, how filthy it is! Look at Russia, look at India - it’s filthy! The air is filthy!”

Though Trump has long complained about India and China’s carbon emission levels, he’s not the only one peddling this rhetoric. In February 2020, Canadian politician Peter MacKay said “we’re not the problem,” before going on to suggest that if the entirety of Canada stopped using electricity and driving, it wouldn’t make any difference to global emissions.

There is undoubtedly truth in the fact that India and China are both major emitters, with China responsible for 28 per cent of carbon emissions and India 7 per cent, ranking them first and third in the world.

But is the argument that simple? Not quite…

When a country’s carbon emissions are calculated, only carbon emitted within that country is typically counted. These are known as ‘territorial emissions.’

On the surface that seems like a logical way of tallying things up, but in reality it distorts the truth.

Countries in the Global North, the USA, UK, Japan, France and Germany in particular, are increasingly outsourcing key parts of their industrial processes.

Consider how many items you own which say ‘Made in China’ or clothes you’ve bought which were manufactured in India; the emissions involved in those products’ creation would have been counted as China and India’s responsibility.

In 2012, China emitted 1.6 billion tonnes of carbon dioxide making products which were exported elsewhere. That’s around 16 per cent of the country’s total, according to the Global Carbon Atlas.

Steel production, for example, specifically accounts for around 10 per cent of China’s CO2 emissions. That’s a significant contributor, but perhaps less surprising when you learn that half the world’s supply of steel is manufactured in China.

There’s no denying that China’s carbon footprint is substantial, with the coal industry representing around three-quarters of emissions. And it’s clear that, along with the rest of the world, it needs to move towards more sustainable power sources. But - the significance of other countries’ reliance on China for manufacturing is an oft-overlooked factor which needs addressing too.

This isn’t a new angle either. France’s Climate Action Network published a study in 2013 which looked at the issue of ‘imported emissions’. The group, along with many others, have been calling for greater emphasis to be placed on consumption-based emissions. These would consider the carbon footprint of imported goods and deduct the emissions of exported goods.

The group have been calling for greater emphasis to be placed on consumption-based emissions.

This approach is believed to more accurately “reflect the consumption and lifestyle choices of a country’s citizens”.

Using consumption-based metrics, China and India’s respective output would drop - albeit not hugely, but enough to reflect the burden being placed on these countries. This is true for much of the Global South, which is increasingly being used as a way of outsourcing carbon emissions.

The problem is even more serious when looking at air pollution specifically. In a 2014 study of China’s air, it was found that a fifth to a third of pollutants - including carbon monoxide, sulfur dioxide and nitrogen oxides - were related goods produced for export. Plus, at least 20 per cent of those pollutants were specifically linked with trade to the US.

So while Donald Trump is right, the air is filthy in China, the responsibility for that pollution is equally murky.

It’s also important to note that China and India, of course, have the two biggest populations in the world. In fact more than a third of the entire planet (36 per cent) lives in those two countries combined.

Given that the two nations produce 35 per cent of CO2 emissions, it’s clear that by capita, the responsibility is lower - even without adjusting for consumption-based emissions.

In fact, when you look at per capita emissions worldwide, China and India are both well down the list.

The worst offenders are, perhaps unsurprisingly, major oil producers like Qatar, Kuwait, and the UAE.

Out of more populous countries, it’s Australia and the US which are out in front, producing 16.88 tonnes and 16.16 tonnes of CO2 per person respectively in 2017. That’s significantly above the global average of 4.8 tonnes per capita.

China, on the other hand, generated just 6.86 tonnes per person and India only 1.84 tonnes.

India in particular gets unfairly tarred by the rhetoric around carbon emissions. According to Climate Action Tracker, India is one of just five countries (and the only G20 nation) with policies compatible with the Paris Accord target.

Wind power has been a major focus for the country, which, as of September last year, had reached 38 gigawatts of wind power capacity. That places India as fourth in the world, behind China, the US, and Germany.

Currently nearly 40 per cent of India’s electricity comes from renewable sources, and though 2020 put the country’s transition to clean energy on hold, it’s still moving in the right direction.

“India has reduced its emission intensity by 21 percent over 2005 levels,” said Modi. “Our renewable energy capacity is the fourth largest in the world. It will reach 175 gigawatts before 2022.”

In both China and India grassroots environmental movements are also gaining impressive traction. But these victories are often omitted from the narratives being expressed about both countries.

“The narrative that the Global South is uninterested in initiating the transition is also blatant erasure of local and national mobilisations in these countries,” says environmental campaign group Friends of the Earth.

“In these countries, where people have been experiencing climate change and environmental disasters for decades, strong movements of resistance are mobilised to demand change from leaders.

“In China urban communities are rising against air pollution and winning important victories. In India, local movements fight the coal industry and deforestation.”

No country is currently on track to reach the 1.5C goal, so everywhere in the world still has a significant way to go in terms of adequately addressing the climate crisis. But in order to truly mitigate global warming and the ecological emergency we’re facing now, there is little to be gained from misleadingly shifting the blame onto other nations.