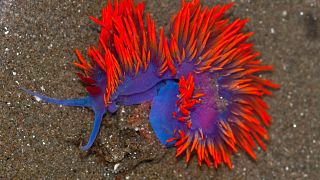 Sea slugs in the waters around Australia are being used to help researchers better understand climate change.

Since 2013 the Sea Slug Census, a citizen science programme powered by volunteers, has documented observations of these gastropods along the Australian coast. It was established by Professor Steve Smith of Southern Cross University in New South Wales and more than 40 census events have taken place so far.

The scheme has recorded more than 630 species, helping improve distributional data for sea slugs and even the discovery of new species too.

Nudibranchs, which are a group of colourful and striking molluscs, have been particularly useful in understanding the impacts of global warming. This is because they typically have a life span of less than a year, which means they respond more rapidly to changes in their environmental conditions.

"We think they are a fantastic group to target for citizen science-based monitoring of marine health,” Professor Smith told ABC News Australia.

So far over 60 species have been found significantly further south than their usual distribution boundaries. This could show shifts in both water temperature and food supplies, as well as the strength of currents.

"Some of these are 2,500 kilometres further south than they've been recorded before,” added Smith.

"So it means potentially we have this conveyor belt of tropical species which is going to come into our coastal waters more frequently.”

Though Hopkins’ Rose nudibranchs are a common sight in southern California, it is unusual to see them in significant numbers further north, as the water temperature is usually too cold to sustain large populations.

The presence of this particular species of sea slug is thought to be indicative of major climate shifts, and unexpected population booms could be used to measure future changes.

"While we are thrilled to see this beautiful bloom of normally-rare nudibranchs, we are concerned about the long term consequences of our changing coastal environment," said Dr. Terry Gosliner, Academy Curator of Invertebrate Zoology and Geology at the time.

"Our current climate conditions are great for some of my favourite slugs, but we can't ignore that warming seas mean less food for sea birds, and adverse impacts for all marine ecosystems. California's unique marine life can't always adapt to so much instability."