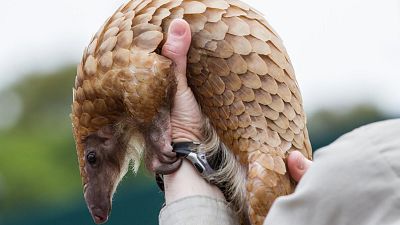 Pangolins are the most trafficked mammal in the world because of their scales   -   Copyright  Canva
By Nichola Daunton  •  Updated: 01/12/2021

Live animals, python skins and slimming pills made from crocodile blood are just a few of the items seized at world borders recently.

Many of the items are part of the world’s fourth biggest illegal market - the illegal wildlife trade. Despite decades of lawmakers’ crackdowns, it is still worth an estimated £15 billion (€17 billion) annually.

What is being smuggled?

313m3 of rosewood were also seized. This is an endangered hardwood, traditionally used to make Chinese furniture and musical instruments.

The smuggled items were found as part of Operation Thunder 2021, which spanned 118 countries and the work of customs, police and wildlife enforcement agencies.

The smuggled items were found as part of Operation Thunder 2021, which spanned 118 countries and the work of customs, police and wildlife enforcement agencies.

The operation, coordinated by the World Customs Organisation (WCO) and INTERPOL, involved searching cars, boats and lorries with sniffer dogs and X-ray scanners.

Law enforcement found that online platforms are being used to arrange trafficking, and illegal money transfers are used to enable money laundering.

“This operation is a crucial part of a global response to a global issue. The trade in endangered species is driven by organised crime groups, and the movement of banned animal products is key to how they operate,” says Samantha Trackman, a Higher Officer in the UK Border Force CITES enforcement team.

The searches focused on items deemed illegal according to the CITES list.

The Convention on International Trade in Endangered Species of Wild Fauna and Flora (CITES) was first drafted in 1963 after a meeting of IUCN (The World Conservation Union) members. The text was formally adopted by 80 countries in 1973 and 183 countries are now members.

CITES regulates the trade of over 35,000 species globally, breaking them down into three categories:

Decisions to upgrade or downgrade species are made at the CITES Conference of the Parties, which takes place every two to three years.

The United Nations Office on Drugs and Crime (UNODC) World Wildlife Crime Report 2020 highlights the need for stronger deterrents when it comes to the illegal trade of wildlife products, especially given the emergence of COVID-19.

The report states that “Zoonotic diseases represent up to 75 per cent of all emerging infectious diseases and include SARS-CoV-2 that caused the COVID-19 pandemic.”

It goes on to note that pangolins were identified as a potential source of coronavirus and the trafficking of their scales makes them the most widely trafficked mammal in the world, with seizures increasing tenfold between 2014 and 2018.

While the report notes that ivory trade has fallen, it also recognises that wildlife crime is moving online, with criminals conducting business via the dark web and encrypted messaging platforms.

With the rapid adaptation of criminal enterprise, some critics argue that CITES is not capable of the enforcement necessary to tackle the ever evolving problem of wildlife crime.

Membership of CITES is voluntary, and while the group can impose sanctions on countries that flout its rules, in theory a member state could simply leave rather than face the sanctions.

The enforcement of the rules is also left to member countries, with many lacking the resources or the political will to enforce them properly.