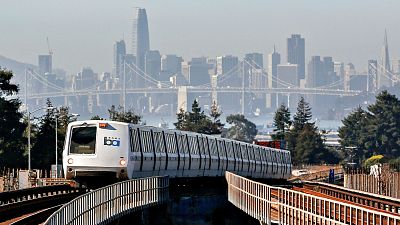 A train has veered off the tracks in San Francisco, US, as a result of an unprecedented heatwave in the area.

The derailment caused a dangerous accident, with all 50 passengers having to be evacuated and several people reporting minor injuries.

Temperatures on the track reached a sweltering 60 degrees Celsius (140 Fahrenheit) near the city of Concord in the Bay Area.

Officials say the BART (Bay Area Rapid Transit) train derailed around 5.30pm on Tuesday and firefighters were called in to rescue passengers. One person who reported back pain was taken to a hospital, according to the LA Times.

Heat played the main role in the partial derailment by causing a curve in the rail.

“Our initial assessment is that heat played the main role in the partial derailment by causing a curve in the rail,” BART said in a statement. BART is one of the San Francisco Bay Area's most popular forms of public transportation.

All passengers of BART train that derailed in Concord have been safely removed. ConFire EMS units working to evaluate passengers for injuries. #davidicpic.twitter.com/F89WeaudPt

The heatwave caused temperatures to soar around 35 degrees higher than the railway’s usual operating temperature, which meant the tracks became “misaligned”.

But, even so, derailments are considered rare, say officials.

How many heatwaves have there been in America recently?

Last year, America experienced its hottest June on record with more than 1,200 daily temperature records broken in the final week of the month alone.

An increasingly concerning element of this pattern is the number of record-breaking night temperatures - and their potentially deadly consequences.

When temperatures fail to drop at night, our bodies struggle to cool down. Usually, during sleep, our body temperature dips and we are able to regulate our core body temperature. However, without those night time dips, more physiological strain is put on the body.

This year, the state of California even considered naming its heatwaves after its third consecutive year of severe drought. So far, 2022 is the driest year in American history.

And just this month, a heat dome spread from the Desert Southwest to California’s Central Valley, before sliding toward the central and eastern United States.

I think we can very confidently say that every heatwave occurring today has been made more intense and more likely because of climate change.

As well as making heatwaves more frequent and intense, climate change is lengthening the "heat season" with extreme heat events occurring earlier than usual in April and May - and often stretching all the way to the autumn.

“I think we can very confidently say that every heatwave occurring today has been made more intense and more likely because of climate change,” climate scientist Dr Friederike Otto, told Euronews Green.

And it’s not just the summer months we should be worried about.

"We have to decouple summer and heat," Kathy Baughman McLeod, director of the Washington DC-based Rockefeller Foundation Resilience Center, told NBC News in an interview this month.

"There's this cultural concept of summer, where we think about vacations and beaches, but a lot of people don't understand how dangerous heat can be."