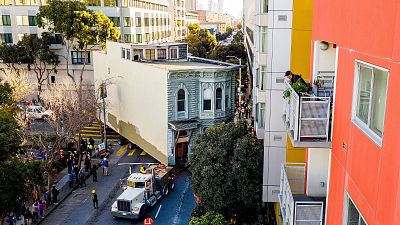 A Victorian house built in the 1880s has been relocated via the streets of San Francisco, US.

The 480-square-metre property is known as the Englander House, and was moved from its original address to a new spot six blocks away.

The process of physically moving houses is called 'structure relocation' - something San Franciscans haven't seen happen in almost 50 years. It used to be a more normal occurrence, but as cities became increasingly urban it fell out of favour.

With 39 per cent of global carbon emissions coming from the building and construction sector, this process could be a way to both preserve historic architectural relics and save on carbon emissions too.

A 48-unit, eight-storey apartment block will be built on the original site, while the house itself is going to be converted into seven residential flats.

The house was one of the last Victorian properties standing on Franklin Street, nestled between an empty lot and a petrol station.

Its new home is next to a historic former mortuary, which was moved a little over four metres to the side to make space for the Englander House.

Members of the public poured onto the streets to document the historic process.

“These houses are part of the fabric of San Francisco,” said Fiona McDougall, a member of the Victorian Alliance of San Francisco to San Francisco Chronicle. “It’s important to preserve them rather than replacing them with a bunch of cold boxes.”

One local, Camilla Blomqvist awoke at 6.15am to watch the procession, telling the Chronicle, "it's the most excitement I've had in 10 years! What else do you do in these pandemic times?"

She added that she was pleased to see the property move to a more suitable location.

“I passed it for years saying somebody should do something about it. It shouldn’t live next to a gas station."