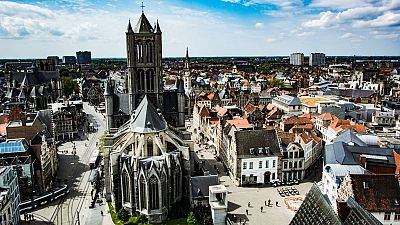 Most people love an underdog – and Ghent, Belgium’s quirkiest city, could well be described as one. Frequently overlooked in favour of its plush sister, tourist-favourite Bruges, which draws in visitors with its chocolate box good looks, Ghent, by contrast, has the feel of a real, working city, but is similarly blessed in terms of aesthetics, with medieval spires, cobbled side streets and meandering waterways.

Thanks in part to its university city status, Ghent’s population is young and dynamic, which goes some way towards explaining the city’s progressive approach to sustainable living. From its zero-waste cafés to city farms and renewable energy initiatives, Ghent has serious green credentials. So serious, in fact, that for two years running it has been a finalist for the European Green Capital Award, narrowly losing (there’s the underdog thing again) to 2020’s winner, Lisbon. Here’s just a handful of reasons to visit this cosmopolitan but cosy, historic yet contemporary city.

Often referred to as the vegetarian capital of Europe, Ghent is a conscious foodie’s heaven, with an increasing number of vegan cafés popping up across the city. KomKommertijd is a vegan institution, serving delicious, reasonably priced soups, mezze-style platters and flavour-packed takeaway lunch boxes, while vegetarian joint Roof Food is a hit in the summer months thanks to its idyllic rooftop garden. Over at Le Petit Botanique, every ingredient is sourced from Ghent’s ecological city farming projects, while Greenway Restaurant is the best option for plant-based fast food, serving wraps, burgers and fragrant curries. For a date night, try Boon , which serves the most beautiful salad bowls in mid-century modern surroundings, or Roots Café’s bargain €25 veggie lunch menu.

…and the farmer’s markets are a foodie’s dream

Booked self-catered accommodation? You’re in luck. At Ghent’s wholefood markets, visitors can pick up the freshest farm-to-table ingredients. Groentenmarkt is not to be missed with its colourful array of organic fruit and vegetables. Here shoppers can buy artisan cheese, oven-warm ‘Mastel’ cinnamon bread from Oud Huis Himschoot, Ghent’s oldest bakery, or a mini jar of spice-charged Tierenteyn-Verlent, made in the city since 1790 and a total bargain at less than €2. There’s also a weekly Sunday market across the road from Gent-Sint-Pieters station, selling fresh fruit, herbs and vegetables, just-baked bread, delicious cakes, drinks and more.

With its manageable size and relatively flat terrain, Ghent is easy to navigate by bike – and given that it is home to the largest low-traffic pedestrian zone in Europe, cycling around the city is a relaxing experience, too. Head to railway stations Dampoort or Gent-Sint-Pieters to hire a bike, but not before you snap up a Ghent CityCard, which entitles users to a day’s free cycle hire. Want a taste of the surrounding countryside? Try the popular River Leie route out to Deinze, 51km of picturesque artist landscape, dotted with villages and museums. Alternatively, head for Wetteren on a 48km journey passing the Damvallei lake, country houses and castle of Laarne.

You can also explore by boat…

Wallace J. Nichols, a scientist and author of Blue Mind, says that time spent by water – whether that be canals, rivers, lakes or shorelines – has a calming and restorative effect on the mind. Put that theory to the test and see the city from a different point of view with an afternoon of exploring Ghent’s gentle inland waterways. There’s a plethora of providers to choose from, but Des Bootjes van Ghent offer silent, energy-efficient electric boat tours departing from the green boat house in Korenlei, with wine, jenever or local beer served onboard. Standard tickets €7.50.

Did we mention the vintage shopping scene?

Ghent’s shopping, like its energy initiatives, leans towards the conscious. Vintage and retro are big here, and there’s plenty of choice, from Belgian retail chain Think Twice (a winner for retro sportswear and quirky accessories) to couture guru Eva Bos, whose appointment-only boutique at 66 Vlaanderenstraat is crammed with previously owned Chanel evening gowns and glittering art deco jewels. There’s an abundance of top-notch flea markets too, like prondelmarkt, which runs Friday-Sunday in the shade of St Jacobs church. I snapped up a near-new aviator jacket and studded bucket bag here for under €25. Elsewhere, thrift-fanatics can leaf through the yellowing pages of second hand novels at the Ajuinlei book market, pick up fine glasswear and kitsch crockery at Burkelbloem, or browse the bric-a-brac displayed in the cobbled side streets of Prisenhof flea market.