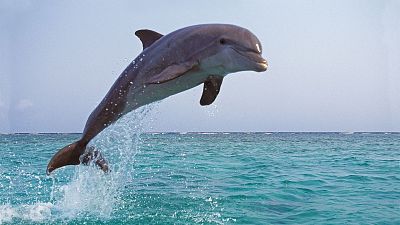 Up until now, scientists have been aware that dolphins possess clitorises (much like all female mammals), but they weren’t sure whether they experienced pleasure.

Research now confirms that the animals do experience pleasure when having sex, due to their “large” clitorises.

Patricia Brennan from Mount Holyoke College in the US led the latest research, published in the Current Biology journal, and found that the dolphin clitoris is indeed functional.

“The clitoris of dolphins has well-developed erectile spaces, is highly sensitive to tactile stimulation, and is likely functional,” the study notes.

The animals do experience pleasure when having sex, due to their “large” clitorises.

Brennan studied specimens from bottlenose dolphins who died from natural causes, such as strandings, and discovered that erectile tissue under the clitoral body forms an ‘S’ shape.

This bend would imply that the tissue extends upon arousal, much like it does in humans - stimulating pleasure.

“Dolphins have very complicated vaginas, which contain many folds. The hypothesis was that these folds were there to exclude salt water during copulation, because it is supposed to be lethal to mammalian sperm. But nobody had actually ever really studied these folds or tried to test the idea,” Brennan told the New Scientist in a recent interview.

“When we dissected the vaginas, I would look at these clitorises and be just amazed. I was like: “Oh my gosh, these are pretty big, well-developed clitorises,” she added.

The dolphin clitoris is located at the vaginal opening. It has a hood, a glans (the outside bit), a clitoral body and crura (arms that branch off) and the hood is wrinkled, much like in humans. Research showed the tissue also has lots of nerve endings.

The finding is particularly enlightening as animal vaginas are largely overlooked in biological research.

The finding is particularly enlightening as animal vaginas are largely overlooked in biological research.

In 2014, National Geographic asked the question, 'Where’s All The Animal Vagina Research?'.

“Male genitals still get more attention because of longstanding gender stereotypes that have seeped into evolutionary biology. For a long time, researchers believed that males played a dominant role in sex, while females were more passive - Darwin himself referred to them as ‘coy’. These stereotypes are pervasive,” the article states.

But vaginas aside, clitorises are even less well-researched. It's only in the last two decades that detailed anatomical research on the human clitoris has come about. The first comprehensive study of the clitoris was led by Professor Helen O’Connell and published in 1998. A further study in 2005 then examined it under an MRI.

The (predominantly male) scientific community has always struggled to get a grasp of the female orgasm. So Brennan’s dolphin study may be helpful in that realm too, concluding, “understanding the phylogenetic history of sexual pleasure may elucidate the role of female orgasm.”

Do any other animals experience pleasure during sex?

As the primary function of mating is to reproduce, it would make sense that nature rewards females with a pleasurable experience during sex - in order to incentivise them to have it more.

Yet only a handful of animals are thought to derive pleasure from sex. Bonobos (endangered great apes) have sex while pregnant or lactating, apparently just for the fun of it. They have been described as “the most promiscuous non-human species on the planet” and up to 75 per cent of their sexual behaviour may be purely for pleasure.

Short-nosed fruit bats are thought to engage in oral sex to prolong intercourse.

This could be for evolutionary reasons, but the jury is out over whether it’s likely just for enjoyment.

The only other known animal to experience pleasure during sex is the female Japanese macaque, which has been observed orgasming - despite there being no direct reproductive benefits.

Macaque species tend to have longer copulations than other primate species like gorillas.

This underwater plant absorbs carbon 30 times faster than a rainforest