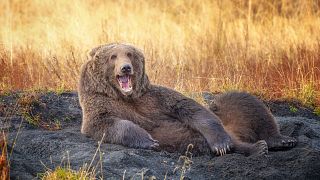 Finalists of the Comedy Wildlife Photography Awards have just been announced and we’ve got the best funny animal pictures they have to offer.

The annual awards were founded in 2015 by photographers Paul Joyson-Hicks and Tom Sullam, who wanted to show the lighter side of animal photography. The pair also hoped that using humour would mean people felt more compelled to look after wildlife.

“We were overwhelmed with the number and quality of entries we received this year, with well over 7,000 photos submitted from every corner of the globe,” says Paul Joynson-Hicks.

“The huge number of images we receive every year illustrates the appetite there is to engage with conservation and reminds us that wildlife truly is incredible and hilarious and, we must do all we can to protect it.”

This year the competition is donating 10 per cent of its revenue to Save Wild Orangutans. The charity helps to safeguard this critically endangered species in Gunung Palung National Park, Borneo.

The best funny animal pics will be chosen by wildlife photographers, comedians, conservation experts and more, including comedian Hugh Dennis, conservation ambassador Bella Lack and co-founder of The Born Free Foundation Will Travers.

The public can also vote for their favourite hilarious wildlife photo which will be awarded the Affinity Photo People’s Choice Award. You can take a look at the 42 photo entries, videos and portfolios at www.comedywildlifephoto.com.

In the meantime, here’s a selection of our favourite funny animal pictures from the list of finalists.

This ‘laughing’ vine snake comes from India. Photographer Aditya Kshirsagar says they can commonly be found in the Western Ghats mountain range.

When approached they show aggression by opening their mouths wide open,” says Kshirsagar but there is no reason to be scared of this harmless snake.

“I was happy to find it and smiling, and it looks like he was smiling back at me.”

Dawn Wilson was photographing brown pelicans on a rainy day in Louisiana in the midst of the COVID-19 pandemic. As they woke up they shook the water off their wings before heading out over the sea to fish.

“This particular one almost seemed to be shrugging his shoulders, as if to say, I have no idea what 2021 will be like,” says Wilson.

Draw me like one of your French bears, Wenona Suydam

This young brown bear sauntered down and stopped on a riverbed opposite photographer Wenona Suydam while she was taking pictures in Kodiak, Alaska.

“She proceeded to start making herself a bear bed pulling back the sand with her gigantic claws,” Suydam says. “Once she had her bed just how she wanted it she laid down, rolled over on her back and started smiling and me.”

The Kodiak bear is one of the largest bears alive today and can be found only on the islands of the Kodiak Archipelago in southwest Alaska. They are known for their intelligence which leads to complex social interactions with other bears - and apparently humans too.

This grumpy pied starling was perched in a tree in Rietvlei Nationa Reserve, South Africa where photographer Andrew Mayes was taking pictures.

Adults of this species mainly have dull, glossy black feathers but can be picked out by the distinctive yellow markings around their beak.

He says its facial expression “perfectly sums up my mood on most Monday mornings”.

These birds of prey usually keep the same nest for years or even decades. At the beginning of each nesting season, they add new material to refresh the nest.

“Normally they are highly skilled at snapping branches off trees while in flight,” explains photographer David Eppley.

“Possibly tired from working nonstop all morning on a new nest, this particular Bald Eagle wasn’t showing its best form.”

Despite a painful miss, Eppley says it was able to gracefully recover after just a few sweeping wing strokes before setting out to bring back more nesting material.

We’re Too Sexy For This Beach, Joshua Galicki

Lying on the sand at Volunteer Point on the Falkland Islands, photographer Joshua Galicki was waiting to capture a Gentoo Penguin jumping out of the surf.

“To my delight, a trio emerged from the water and walked straight in my direction,” he says

“I really enjoyed photographing this moment as it seems to capture some sassy personality displayed by these individuals.”

Siddhant Agrawal has been following the family of a tigress called Paaro in India’s Jim Corbett National Park for a number of years. This cheeky young tiger is one of her offspring.

“This is her daughter who has stood on her hind limbs to be able to scratch her face with a log,” explains Agrawal. But instead of looking like she is scratching an itch, the photographer says it appears as if she is carrying the log on her shoulder.

Jim Corbett National Park is home to the largest population of tigers in the country with more than 150 individuals found there at the last count. These animals are endangered with fewer than 2,500 potentially left in the wild.

Boxfish are usually relatively shy, turning their backs on anyone who takes an interest in them. To get close, photographer Philipp Stahr had to swim just above the fish with his camera pointing down, pretending not to see it.

“When the right moment had come, I turned the camera 90 degrees to the front and just point and shoot, hoping to have the fish in focus,” Stahr explains.

“I never expected to have its beautiful lips that close.”

On a game drive at Murchison Falls National Park in Uganda, Dirk Jan Steehouwer found a group of monkeys playing in a tree.

After a while I saw a giraffe coming from the right,” says Jan Steehouwer. “ By the moment the giraffe did pass the branch, one of the monkeys was on his post.”

At first glance, the image creates the illusion of the monkey grabbing onto the giraffe’s long neck for a ride.

This image of an endangered Proboscis monkey was taken in Borneo. These long-nosed monkeys can be found in mangrove forests and coastal areas of the island. As the primate world's most prolific swimmers, they are no strangers to comedy leaping from trees and hitting the water with a bellyflop.

Jakub Hodan took the picture and isn’t sure if this Proboscis monkey is just scratching its nose on the rough bark or giving it a big kiss.

As Jakub says, “Trees play a big role in the lives of monkeys. Who are we to judge?”

You can find more information about the work done by Save Wild Orangutans and donate to help save this critically endangered species here.