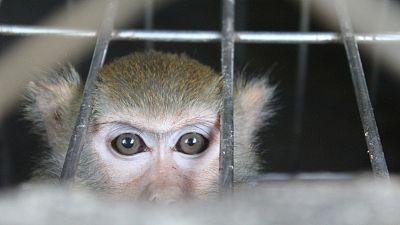 Dozens of animals are forced to entertain in the two tourist resorts   -   Copyright  Animals Asia
By Doloresz Katanich  •  Updated: 28/04/2022

Monkeys riding dogs and bears wearing tutus, while driving a buggy. These kind of stunts might make a few tourists laugh at one Vietnamese resort, but others call it 'torture island'.

Perhaps the most famous beach in Southern Vietnam is Nha Trang, known for its sandy beaches, palm trees and warm water. But just a few kilometres away lie two tourist resorts, both offering free circus attractions.

Animal welfare charity Animals Asia's latest report reveals the extent to which the animals who live there suffer.

The island Hon Lao is also called Monkey island due to the fact that there are herds of monkeys living there. Those who have been trained by punishment are forced to do sickening tricks like riding a motorbike in tiny costumes or taking part in swimming contests.

The rest of the day - 23 hours - they spend in tiny cages separated from each other.

"They have no ability to carry out any of their natural behaviours," says Animal welfare director at Animals Asia Dave Neale.

In a neighbouring tourist destination, managed by the same company, called Long Phu, endangered animals like moon bears, and even an elephant, are forced to perform.

Tripadvisor feedback about the resorts acknowledges that the animals look fearful and sick.

"We saw the bears have metal rings through the nose and then a string", says Neale. "We saw the keepers obviously pulling at it - which is incredibly painful for them. And that happens both during the circus shows, but also after the show."

The moon bears are forced into tiny cages while the elephant is kept on a chain.

Tripadvisor feedback about the resorts acknowledges that the animals look fearful and sick. One tourist even dubbed Monkey island 'torture island'.

Is it legal to use endangered animals in circuses?

A 2019 directive from the Vietnamese government states that endangered animals, which include bears and elephants, “shouldn't be used for commercial exploitation,” says Neale.

"But it doesn't specifically state that using them for circuses is classed as commercial exploitation."

There are still 17 facilities using wild animals for entertainment in the country.

The NGO is working with the government to stop circuses using animals in the country. Animals Asia has also offered to help relocate these animals.

The NGO has recently released a report about animal abuse within Vietnam’s circuses. There are still 17 facilities using wild animals for entertainment in the country.

Watch the video above to see how the animals are treated in the two tourist resorts.