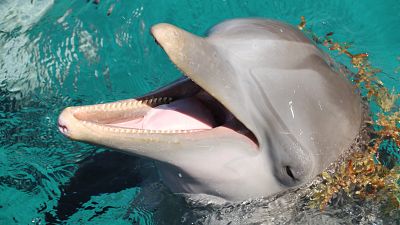 Bottlenose dolphins are all individuals. Each one communicates with a unique whistle and researchers are now tuning in to these distinct noises to help protect the much-loved species.

Scientists at Edith Cowan University (ECU) and Curtin University in Australia are using sound, instead of sight, to track dolphin communities. As part of the study, bottlenose dolphins living in Western Australia’s Swan River were monitored to find out if unique whistles could be attributed to individuals. It was the first time attempted acoustic tracking was trialled in the area and by the time they had finished, over 500 whistles had been matched to dolphin photos.

Curtin University Professor Christine Erbe tells Euronews Living, “a whistle is like a name for an individual.” Each individual dolphin “has a unique signature whistle which it emits when it is isolated from the group, so that animals can find each other again. These are like contact calls.”

“A whistle is like a name for an individual.”

"Dolphins are social creatures and very frequently seen in groups, which makes the process of matching the whistles to particular individuals very challenging," she says.

By using handheld hydrophones deployed over the side of a small craft jetty at a depth of 1.5m, researchers were able to hear the dolphins communicating at a high frequency. As a result, “most whistle types were narrowed down to a range of possible dolphins that could have produced it,” Christine continues.

These results could have significant implications for dolphin conservation globally, ECU researcher Associate Professor Chandra Salgado confirmed. Until now, researchers around the world have relied on “laborious and expensive visual surveys on boats to track individual dolphins,” she says.

The study was based on data from previous research trips in recent years. Results were obtained by matching the recycled data from two independent studies, one on photo-ID, the other on underwater sound, to see the correlation. “We literally went through our databases to find days when we had simultaneous photographs of dolphins and underwater recordings,” says Christine. "Our next goal will be to narrow this down to individuals.

The bottlenose species of dolphin is known for being particularly intelligent and charismatic - their curved mouths give the appearance of a friendly, permanent smile. They have an average lifespan of 45 to 50 years, range between 10 to 14 feet in size and weigh approximately 1,100 pounds.

In the wild, the creatures can reach speeds of over 18 miles an hour and surface to breathe around two or three times a minute, according to National Geographic. The fact that they are so swift-moving makes them difficult to track.

“Dolphins are social animals and vocalisations like the ones explored in this study serve as both a vital form of communication between animals and an important tool in hunting and feeding,” says Lucy Babey, Head of Science & Conservation at whale and orca conservation charity ORCA. She adds, “learning more about these animals through studies like this one will help us protect species which are facing a wider array of threats than at any other point in history.”

Are dolphins threatened by climate change?

Dolphins are threatened by commercial fishing for other species, such as tuna, and can become entangled in nets and other fishing equipment. Human activities which can affect their daily lives include “underwater noise caused by shipping, oil and gas exploration, military activity and man-made pollution” according to Danny Groves, spokesperson for Whale and Dolphin Conservation (WDC).

Climate change may also affect a dolphin’s ability to survive by “changing the distribution of their prey, as preferred water temperatures change, which in turn might change the distribution of the dolphins. We can use acoustic data to track dolphins and so, over time, we can understand these changing needs as the climate changes too,” he explains.

However, “right now it must be a good time to be a wild whale or dolphin, swimming around the ocean,” concludes Danny. “Whilst we are locked-down, they will be reclaiming their territory.”