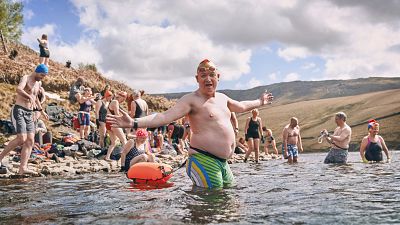 A quiet mountain in one of the UK’s national parks might not seem the obvious place to encounter a noisy group of protestors in just their bathing suits (flowery swim caps optional).

But hundreds of bathers from the Outdoor Swimming Society made a splash while defying civil law to go for a dip at Kinder Reservoir in the Peak District, 90 years after a mass trespass by 400 walkers helped to enshrine the Right to Roam in UK law.

This time around, the trespassers want better access to the countryside and particularly to inland bodies of water, which are often out of bounds in England because landowners don’t want swimmers on their property.

“We had no concept of how many people were going to come,” says Owen Hayman, a campaigner and swimmer.

“It was a bit worrying in case we didn’t have enough people there - it’s not a mass trespass if there’s not a whole mass of us.”

But in the end, around 400 people gathered to take a dip.

“It was extremely exciting and was only at the last minute that we realised how many were there. We were there for an hour and a half and people kept coming and swimming,” he laughs.

As well as calling for greater access rights, the activists are also opposing a potential move to change trespassing from a civil to a criminal offence. Were that motion to pass, it could also negatively affect nomads and travellers living in campervans and caravans.

Why is open water swimming allowed in Scotland but not in the rest of the UK?

The campaigners also want to challenge outdated views about why open water swimming is not allowed in certain places in England and Wales. In Scotland, nearly all 800 reservoirs allow swimming under the 2003 Land Reform Act.

“I think it’s misleading that land owners try to make us think this is about our own safety,” says Owen.

“They’re not interested in that, they are worried about dealing with potential anti-social behaviour, but they frame it as having a concern for safety.”

He continues: “People do drown in open water, often young people, often alcohol is involved. These horrible things happen, but what we are trying to say is that the approach to water safety in this country for decades has been putting fear into people and saying that open water is really dangerous.”

He points out that a better approach would be to give young people enough information to do it safely and the opportunity to learn from seeing older swimmers using the correct equipment and following a common-sense approach.

Where can you swim in England and Wales?

It doesn’t help that there is general uncertainty about where people can and can’t swim in the eyes of the law.

“It’s crackers that the more dangerous a place is to swim, the more likely you’ll be allowed to swim there,” says Owen.

“On the coast, you’ve got waves and currents, but you can swim. Then inland, there’s these benign bodies of water like lakes and reservoirs and chances are you’re not allowed to swim in them, but it’s hard to know. It’s nonsensical.”

People will tell you it has saved their life or their sanity.

Like many wild swimmers, Owen is evangelical about its benefits.

“People really need this resource. Access to open water is totally transformative for the lives of many people,” he says.

“It reaches people that other activities don’t - different body types, different abilities, women experiencing menopause. People will tell you it has saved their life or their sanity.”

And he points out that changing the law to make trespassing a criminal offence would adversely impact the very people who most need the water.

“People with anxiety, people of colour, they don’t want to have a run-in with the police,” he says.

“They don’t know how they are going to be treated.”

Better swimming safety for all is what the campaigners want, not more rules that will only end up being broken.