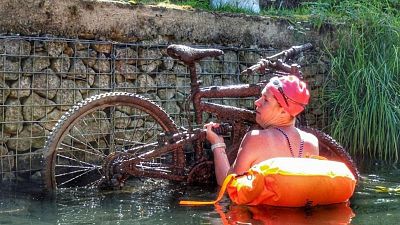 The rise in outdoor swimmers over the pandemic year is having a knock-on effect on the amount of litter bagged and binned from riverbanks and shores around the UK.

The Outdoor Swimming Society, which has reported an increased membership by 36 per cent to 136,000 since last March, even includes a call to collect rubbish in and out of the water in its lockdown swimming guide.

Many bathers have added a litter picker, gloves and bin bags to their kit, ready to pick up waste as the weather warms and more people visit the countryside and coast.

The Canal and River Trust says that each year, an estimated 14 million pieces of plastic rubbish end up in and around British waterways, with around 500,000 pieces flowing out into the oceans.

And action group Surfers Against Sewage has just launched the Million Mile Clean to recruit 100,000 volunteers to clean the places they love while walking, paddling or swimming 10 miles throughout the year.

"Beach, street, river or mountain, you can clean anywhere, anytime. You can either run a clean and get your whole community involved, join a clean in your local area, or do a mini beach clean in your own time. All of your cleaning action counts towards our million-mile goal," says the charity.

The urge to protect the waterways from waste is part of the stewardship many swimmers feel towards their waters.

Pagan Keeley Sparrow, who has established the Hicca Dippers in Bedfordshire over the last year, thinks there is also an important element of spirituality involved.

"I think wild swimming has strengthened my connection to the natural world - I see the turning of the seasons close up daily, and am in constant awe of nature herself,” she explains.

“One of my river spots feels like a spiritual sanctuary to me - I spend time clearing rubbish and looking after the area. In the summer it gets used lots by local teens who leave litter everywhere. I bring a litter picker and binbag and clean before I swim. It feels like an act of honouring the Spirits of Place. I give thanks every day that I can experience the beauty of the river."

Imogen Radford, from the Outdoor Swimming Society inland access team, adds, "Outdoor swimmers immerse themselves in nature and that is a key part of why they love where they swim. They know that these places are precious for nature and people, and they will very often look after them actively, as well as not leaving any trace themselves.

“It is usual to take along gloves and bags as standard parts of their kit to pick up any litter they find, on the banks or in the water.

"Swimmers are aware that sometimes their swim spots can be at risk of being closed if there are problems, so they are keen to make sure that doesn't happen, as well as just generally being responsible about the environment, other people and their own safety, as in our Outdoor Swimmers Code."

Summer brings a surge of rubbish

While many swimmers have had their swim spots to themselves over the winter months, they are now bracing for an influx of visitors over the summer, with the rise in rubbish that may bring.

Kate Rew, founder of the Outdoor Swimming Society is concerned by how much the situation has worsened of late.

"I live in Somerset, land of cider drinkers, and much of my litter picking last summer was collecting cans from the reeds along the Avon. We do bank clear-ups too. We have a very popular hanging out spot near the river in Bath which can see horrendous pile-ups of rubbish on hot days: one person leaves a bag of litter and hundreds follow.

"For me, the key is to bring bags, wear gloves (during hot spells there are always abandoned pants, and worse), get it done as fast as you can as early in the day as you can, and give it no further thought than now peace is restored, and it will be nice for another (person, beast, bird or fish) that follows," she says.

For Hicca Dipper Adele Cushing, setting a good example is an important part of cleaning up, as is acting as a steward of the Earth as part of her Christian faith.

She adds, "I think we all know that telling people off doesn’t work. It doesn’t work with us when we get scowled at for swimming and it won’t work with others. But understanding that people are a bit crazy at the moment having been locked up so long and mutually enjoying and looking after our surroundings, that’s got to be a positive way forward."

Plimming is the new plogging

Plogging - a term combining jogging with the Swedish term for picking up litter ('plocka upp') has been fashionable for several years, and now wild swimmers are getting in on the act.

In Hull, East Yorkshire, the Ice Warriors swimming group and Jolly Triathlon Club are joining forces to organise a 5km rubbish run around the city centre and marina later in the month after an increase in rubbish around training spots such as Welton Waters.

And in Swansea, the Wet Bandits sea swimmers joined #dontbeatosser volunteers to clear the beach of one tonne of debris left behind by seaside sunseekers recently.

Ryan Stephens, who formed the Wet Bandits in October says that working together allows us to tackle this problem and clear the mess in a shorter amount of time.

“Typically the most common pieces of rubbish found, other than fishing nets, would be bottle tops, bottles and cans, including smashed glass hidden in the remnants of beach fires, nails from pallet wood that’s been burnt and plastic from filter tip packaging, as well as cigarette butts. I think with cigarette butts that people are inherently uneducated about the fact they contain plastic and do not break down naturally, so are more prone to throw them on the floor."

It seems that plimming - swimming and plogging combined - could be making waves of its own in the war against waste.