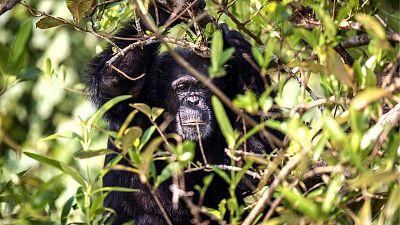 The sound of grunting soon fills the air, and slowly but surely, an ape walks onto the beach to grab some food.

These animals are all that remain of a US-funded research project which saw 400 chimps endure decades of experimentation. For many of the primates, biopsies and brutality were a part of everyday life.

"They were traumatised," says Ssuna, the director of Humane Society International (HSI), an animal rights group that now cares for the primates.

“They were subjected to a lot of invasive procedures, and the emotional abuse has left its scars.”

Why does the USA fund animal testing in Africa?

Starting in 1974, the research project was conducted by the New York Blood Center (NYBC), a non-profit blood bank investigating the impact of hepatitis B.

The medical body amassed huge numbers of apes to conduct cruel and inhumane experiments on. Sometimes the animals didn’t survive.

In a move that provoked global outrage, NYBC then cut funding in 2015 - abandoning the apes on a tiny river island without food or medical care.

"Effectively, they left these poor chimpanzees to suffer from dehydration and starvation,” says Brian Hare, the US-based primatologist who launched the petition.

Despite lack of funding, local staff at the research centre continued to care for the chimps.

Under pressure, NYBC eventually struck an agreement to split the costs of long term care with the Humane Society, pledging €5.5 million in 2017.

Years later, the former lab chimps now enjoy veterinary care and two daily meals. But many still bear the scars of their grim past.

During morning feeding, Ssuna points to a grizzled ape who is missing an arm. The vet says the animal is "essentially a victim of torture".

The chimp, named Bullet, lost the limb as an infant when poachers killed his mother and ripped him from her arms. He soon ended up at the research lab, where years of experimentation followed.

"Our caregivers are trained not to do anything that could bring back those kinds of memories,” says Ssuna.

“We try as much as possible to keep a very positive relationship between the caregivers and the chimps."

What’s next for Liberia’s abandoned chimps?

After being taken from their homes as infants, none of the chimpanzees can be returned to the wild. Instead, they will live out the remainder of their lives on the island, receiving food and medical support from HSI caregivers.

The team prepares over 200 kilograms of food for the apes every morning, and 120 kilos in the afternoon - amounting to over 10 tonnes every month. According to Ssuna, this will continue until every ape on the island dies.

That could be over 30 years from now.

"As much as we would like to return them to the wild, we can’t," says Ssuna

"But we still think that the future is bright for them. They’re in a better place now, and that’s all that matters."

Watch the video above to find out more about Liberia’s chimp island.