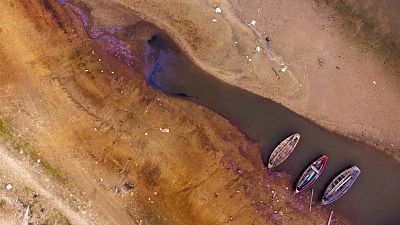 Boats in sitting on the bed of the Paraguay river amid a historic drought that is affecting its levels, in Chaco-i, Paraguay, Monday, Sept. 20, 2021.   -   Copyright  Jorge Saenz/Copyright 2021 The Associated Press. All rights reserved.
By Scott Brownlee  •  Updated: 01/10/2021

Paraguay has been in the grips of a severe drought since 2019. It has seen water levels plummet in the landlocked nation's all-important waterways, cutting it off from the rest of the world.

The Paraná-Paraguay Waterway, which winds through Argentina and up to Paraguay, has dropped to its lowest levels in 77 years.

This life-giving conduit allows ships to move 96 per cent of the country’s international imports and exports. Water levels are getting so low that, to avoid grounding, cargo ships are having to dramatically lighten their loads.

After last year saw historically low water levels, Paraguayans have been surprised to see levels drop even lower this year.

Sandbanks have appeared in unexpected places cutting off streams and canals and making waterways even more difficult to navigate.

The chain reaction from this years-long drought has seen many industries suffer in Paraguay, from agriculture and fishing to pharmaceuticals and shipping.

October 2020 also saw devastating wildfires rip across huge areas of forest in the country, burning hundreds of thousands of hectares of land. These fires took place alongside a heatwave registering record high temperatures which exacerbated the problem.

Scientists are unsure whether the drying up of the river is part of the natural cycle or not but are worried that climate change could be to blame.

Solving the problem has become priority number one for the country's government as they have begun dredging passages along the Paraguay River in an attempt to allow ships in and out of the nation's capital, Asunción.