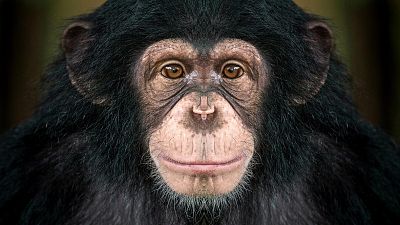 Poachers are claiming as much as six million tonnes of bushmeat annually from the Congo Basin alone   -   Copyright  Getty Images
By Ben Anthony Horton  with AFP  •  Updated: 24/02/2022

As the Central African market for bushmeat expands, great ape poaching is now reaching crisis point, with over 3,000 apes illegally killed or stolen from the wild each year.

Vast networks of logging roads, modern weapons and cheap transportation are behind the rise - with poachers claiming as much as six million tonnes of bushmeat annually from the Congo Basin alone.

But away from the bloodshed, a refuge hidden among the trees of the Khahuzi-Biega National Park is offering hope for Congo’s endangered primates.

"These orphaned chimps are coming to us because of insecurity and war,” says Sylvestre Libaku, manager of the Lwiro Ape Rehabilitation Centre (CRPL).

“We just want to let the animals live peacefully in their natural habitat.”

With an assortment of at-risk apes from 16 different species, the sanctuary has nursed wounded animals back to health for over two decades.

Among its wards are chimpanzees, gorillas and bonobos - all saved from poachers in a region where illegal activity goes largely unchallenged.

“If they have that, they will grow up very easily and very quickly."

For the carers who tend to Lwiro’s endangered apes, bloodshed is a part of everyday life.

Many of their charges need constant attention after arriving at the facility, with complex injuries resulting from their entanglements with bushmeat hunters.

"First we try to put in place all the means to see how to save the animal's life,” says Ernest Kalalize, veterinary assistant at the centre.

“In the case of injuries or other serious cases, we see how to stop the bleeding and then anaesthetise the animal, before suturing it and returning it to its enclosure."

Once there, the animals are cared for by the sanctuary’s 55 members of staff - many of whom work around the clock to tend to the primates' every need.

Each of the 110 chimpanzees at the sanctuary eats as much as six kilograms of fruit, cereals and vegetables every day. The infants are bottle-fed by their carers.

“First, we give them meatballs and bananas, and if there are sick animals, that's when we take the opportunity to give them medicine too."

Many months of care are needed to stabilise an animal at the facility.

Bordering the Kahuzi-Biega National Park - a UNESCO World Heritage Site - the Lwiro Centre was founded in 2002 by the Congolese Institute for the Conservation of Nature.

Some 250 eastern lowland gorillas live in the neighbouring rainforest - the last of their kind in the wild.

Much like their relatives in the sanctuary, these apes are at the mercy of poachers looking to hunt and kill them - often to provide food for their families.

For Kalalize, this could all change if the Congolese government provided more financial assistance to the sanctuary.

"There is still not 100 per cent government involvement in the management of the Lwiro Primate Rehabilitation Centre,” says the veterinary assistant.

“It is run through the efforts of people who, out of their own good will, are trying to see how to protect the animals that are very much under threat."

Watch the video above to see the ape sanctuary for yourself.