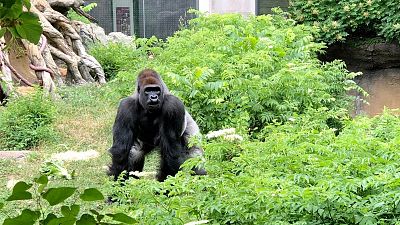 A gorilla in Chicago has become so distracted by zoo-goers' phones that his keepers fear it could harm the great ape’s development.

Amare, a 16-year-old eastern lowland gorilla who lives with three other ‘bachelors’, was recently caught off guard when one of his troopmates charged him - all because he was staring at a phone screen.

Lincoln Park Zoo has put up a barrier to keep the public back from the 30-stone primate’s enclosure, as too many people were attempting to show Amare photos and videos through the glass divider.

His apparent ‘phone addiction’ - so relatable in this day and age - has made headlines across the Atlantic. But a spokeswoman for the Chicago zoo tells Euronews Green that this is not an accurate characterisation of the situation.

Amare the gorilla is not ‘addicted’ to phones, she says, he has simply shown interest in looking at visitors’ shiny devices when they hold them up.

It’s concerning behaviour nonetheless. “The best thing for gorillas and chimpanzees is to let them be apes!” says Stephen Ross, the director of the zoo’s Lester E. Fisher Center for the Study and Conservation of Apes.

“It is important that they spend time focusing on their relationships with their groupmates, so that they can form social bonds and learn from one another. While it may seem that the apes enjoy interactions with guests watching videos and seeing photos, it is best to minimise these distractions.”

Why is too much screen time bad for apes?

Gorillas - together with bonobos, chimps, orangutans (the three other great apes), gibbons and humans - make up the Hominoid family. They (we) are distinct from monkeys, being large and tail-less.

The intelligence of gorillas is well-documented. Dutch primatologist Frans De Waal writes of incidents where wild gorillas have disarmed poacher snares, which requires a grasp of basic mechanics, or crossed deep water.

As social animals, it’s important that gorillas have the time to be themselves - without having selfies thrust upon them.

Amare’s surprise attack from a troopmate left him unharmed, and was part of the normal day-to-day sparring the four bachelors engage in.

Kept apart from a dominant adult male in another enclosure at the zoo, the teenage gorillas often get aggressive and play fight to establish their own hierarchy.

But if Amare gets too distracted by people and their phones, the zoo warns, he will miss out on these important interactions and drop down in the group’s social order.

It could lead to bullying and even “severe developmental consequences”, Lincoln Park Zoo told reporters.

To protect Amare, zookeepers have placed a few rope barriers in front of one section of the bachelor gorilla habitat. If they see anyone attempting to show the gorillas their phones, staff step in to dissuade them and explain the sensitive situation.