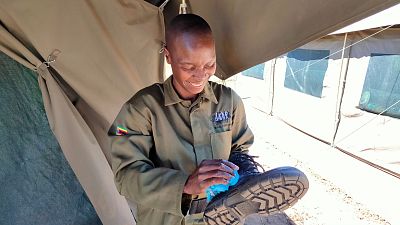 Knives and forks, a worn rangers boot, a battered and torn uniform; these seemingly mundane items are raising funds to protect endangered animals across Southern Africa.

The objects tell the story of the work the International Anti-Poaching Foundation (IAPF) is doing to save endangered species, protect ecosystems and battle wildlife crime in Africa.

They have been curated by the rangers themselves to best represent their experiences on the front line of anti-poaching efforts. And now IAPF is giving people a chance to buy these real-life items from ranger camps via an online shop.

Also on offer are a number of “once in a lifetime” experiences including a trip to one of the organisation’s ranger camps in Zimbabwe or the chance to spend a day with the founder, Damien Mander.

Mander is an Australian ex-special forces sniper who found a “purpose among chaos” after witnessing the death of a buffalo trapped in a wire snare.

“I came out of the military and into conservation when it was becoming increasingly militarised as a ground-level response to the threats that were being placed on elephants and rhinoceros,” he says.

In the beginning, preventing poaching seemed simple, but he soon realised a new, different approach to wildlife conservation was needed.

“If you are a hammer, then everything is a nail.”

A new approach to conservation

The funds raised by this unique sale will help IAPF’s mission to fight illegal poaching and educate people in the communities where it happens.

Rangers and staff for IAPF live and work across Southern Africa, protecting everything from elephants to rhinos and zebras over more than half a million hectares of land. They believe that the best way to approach conservation is not with a “full-on armed assault”.

“There’s something called fortress conservation which is very popular. That is sort of drawing a line in the sand and saying this is the wilderness and we are going to defend it with guns and ammo,” explains Mander.

We had to try and find a way to work with the communities rather than against them.

For many, this means bringing in people from hundreds of kilometres away to defend wildlife reserves and protected areas. All this was doing, he says, was creating an ongoing conflict with local Indigenous people.

“We had to try and find a way to work with the communities rather than against them. There’s only so many times you can kick someone’s door down, put a gun in their face and expect to build a long term positive relationship.”

By educating people about the economic benefits of preserving animals, IAPF is eliminating wildlife crime without being heavy-handed. So far they have seen poaching drop by 80 per cent in the regions where they operate. Mammal populations have also increased by 400 per cent, “all without a single fatality,” Mander adds.

One of IAPF’s most famous teams is an all-female group called the Akashinga or ‘brave ones’. Their job is about more than just animal conservation though. It allows many of the rangers to buy houses, send children to school or further their own education.

Only seven per cent of wildlife rangers are female, with many women stuck behind desks or used as a tool for positive PR campaigns. Mander wanted to see what would happen if they were put in charge of the protection of wilderness areas instead.

At first, forming the world’s first all-female armed anti-poaching unit wasn’t easy. IAPF had three days to sit down with the local Chief and government. A lot of people thought it was a gimmick with many of their potential new recruits ridiculed and told to stick to more traditionally female roles.

The women that did apply were survivors of serious sexual assault, domestic violence, single mothers and those that had been abandoned by their husbands.

“Actually the toughest women in some of the harshest areas on this continent to survive are the ones that came forward for selection,” says Mander.

They started with 16 female rangers protecting around 36,000 hectares of land and now the organisation has grown to include 240 members of staff, both male and female. Included in that are 140 female law enforcement officers with a further 100 currently being trained.

“We're four years into this and based on my experience of over two decades in law enforcement and combat, I can say, in comparison to everything I've experienced, putting women into the forefront of law enforcement changes the dynamics of society for the better.”

Many of the countries that IAPF operates in are ranked near the top of the Global Corruption Index. It can make meaningful progress on preventing wildlife crime difficult.

But research from George Mason University in the US has found no reported incidences of corruption in three all-female ranger teams working across Africa - including the Akashinga.

“The all-female anti-poaching units boast an impressive record of zero reported incidents of corruption,” the study says, “and in the broader context of anti-poaching efforts, major reductions in poaching activities in the areas that they cover and patrol, and an increase in sightings of wildlife activity.”

It means that organisations like the IAPF no longer have to employ people from far away to prevent collusion, cutting the cost of law enforcement by two thirds. Instead, they can invest directly in local action.

“It's turned conservation funding into the most effective form of community development funding, which is women's empowerment,” says Mander, “ It’s about providing them with a platform to build a career path for themselves.”

These are the threads of the narrative that is basically holding on to the natural world on behalf of a global community and civilization itself.

Though they may seem basic, the objects available as part of IAPF’s sale are a part of the incredible story of these rangers. They are items used every day by people on the front line of nature protection.

“These are the threads of the narrative that is basically holding on to the natural world on behalf of a global community and civilization itself,” Mander concludes.

“Our future is dependent on our willingness to preserve biodiversity and these are the people that do it with their lives every day.”