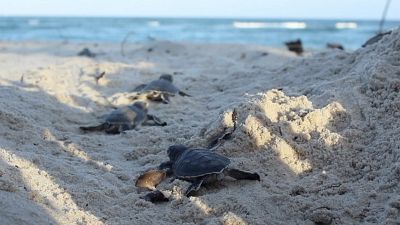 Tiny green turtles are scrambling to the safety of the ocean at Tiwi Beach on Kenya's south coast.

Every one that makes it is great news for their species, which is listed as endangered by the International Union for Conservation of Nature (IUCN).

It’s a perilous journey, but luckily for these hatchlings they have their own personal bodyguards - The Tiwi Turtle Police.

This local organisation helps to patrol 12 kilometres of coastline, monitoring turtle nests and picking up rubbish.

One Tiwi Turtle Police member Mkambe has been watching over the eggs since they were buried, and his careful monitoring will increase the hatchlings' chances of survival.

"I love this, because before we started doing this, these turtles used to be eaten," Mkambe explains.

"I was not happy about that, because these turtles attract many other fish, and people come to see them. They come here from all over the world to see them."

But even with his help, the turtles will face multiple dangers on their way to the ocean: crabs, crows, sea gulls, dogs and humans might all catch them before they reach the sea.

Although these babies are grey-black in colour, they are actually green turtles – adults have a green layer of fat under their shell, giving them their name.

Kenya's beaches are nesting sites for a variety of different turtles, including leatherbacks, hawksbill and green turtles.

All are listed as vulnerable by IUCN, with green turtles classified as endangered, and hawksbills critically endangered.

Those that survive will travel thousands of kilometres around the world's oceans.

If they are female, they will likely travel thousands of kilometres back here again, returning to this very spot in a few years' time when they are ready to lay their own eggs.

Click on the video above to learn more about these baby turtles.