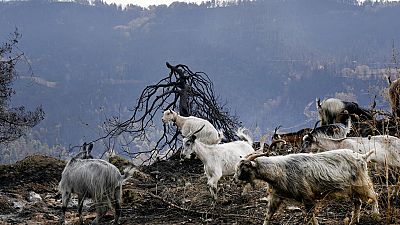 The Greek prime minister has said the country has reason for optimism after managing to contain the bulk of the wildfires that have ravaged several regions over the past fortnight.

"We can be more optimistic today" than in previous days, Kyriakos Mitsotakis said, after overnight rain in several regions contributed to an improvement in the situation on Thursday.

But he warned nonetheless that the danger of a resurgence remains high, during a particularly hot and dry summer. "We are in the middle of the month of August and we still have difficult days ahead of us," he said.

There is relief that temperatures were not predicted to top 34 degrees Celsius on Thursday, having reached up to 45 degrees in some areas during the first few days of the month.

Speaking in Athens at his first news conference since the fires broke out, Mitsotakis described the recent wildfires as "the greatest ecological catastrophe of the last few decades", which happened during "the worst heatwave" Greece had suffered for around 30 years. The authorities, he said, had faced around 100 active blazes each day.

The wildfires stretched Greece’s firefighting capabilities to the limit and led the government to appeal for help from abroad. Hundreds of firefighters, along with planes, helicopters and vehicles, arrived from 24 European and Middle Eastern countries to assist.

"We succeeded in protecting thousands of people, but we lost forests and property," the prime minister said.

More than 100,000 hectares burned in Greece over the two weeks from July 29 to August 12, according to data from the European Forest Fire Information System (EFFIS) -- part of the EU's Copernicus programme -- analysed by AF¨P. From 2008 to 2020, the average for the same period was 2,750 hectares.

No less than half of the damage -- more than 50,900 hectares -- occurred in Evia, Greece's second largest island. The largest fire which broke out on August 3 was still smoldering on Thursday, having destroyed most of the island’s north.

Entire mountains of mainly pine forest have been reduced to bare, blackened stumps, while olive and fig tree plantations and vineyards were also destroyed.

The fires in Greece have cost three lives and prompted the evacuation of thousands of people. Thousands of properties have been destroyed.

The government wanted to avoid a repeat of the summer of 2018, when a fast-moving wildfire engulfed a seaside settlement near Athens, leaving more than 100 people dead, including some who drowned trying to escape by sea.

But many residents and local officials criticised this year’s evacuation orders, arguing they were premature.

The wildfires were the worst in Greece since August 2007, when more than 250,000 hectares of forests, olive groves and other land were charred and 77 people died.

"The climate crisis — I’d like to use this term, and not climate change — the climate crisis is here," Prime Minister Mitsotakis said, adding that he was ready to make the “bold changes” needed to tackle the changing climate.

“This is a common crisis for all of us,” he said, denying that it was a "Greek phenomenon" and citing Turkey, Italy and Algeria which have also been struck by serious wildfires.

Spain and Portugal brace for wildfires with temperatures set to soar