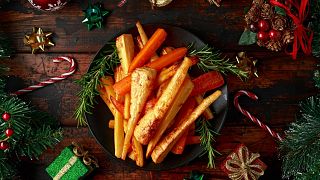 One in five Brits will be incorporating vegan dishes into their Christmas dinner this year   -   Copyright  Getty Images
The opinions expressed in this article are those of the author and do not represent in any way the editorial position of Euronews.
By Ben Anthony Horton  •  Updated: 16/12/2021

When I first went vegan, nuts were an unavoidable part of my Christmas dinner. I consumed nut roasts as appetisers, sides and mains. I devoured them in floods of gravy, braised in red wine sauce and crafted into the most peculiar shapes.

From the humble loaf to the elegant cutlet, there was no escape from the trusty kernel. They came tossed in salads, arranged into wreaths, and roasted beyond all possible recognition.

Now I am not one to disparage the trusty nut, but there comes a point when the dependable nut roast has to make way for a rival at the head of the table.

And with one in five Brits planning to incorporate vegan dishes into their festive dinner this year, now might be a better time than ever to reimagine your plant-based Christmas.

No nuts, no problem

With the nut roast off the menu, there are a growing number of options to tantalise the taste-buds over the festive period.

Long gone are the days of insipid, rubber-like vegan meats. It is now possible to pass the entire 12 days of Christmas without a single nut in sight.

From Aldi’s no-turkey crown, to Sainsbury’s maple-glazed no-gammon joint, mainstream UK supermarkets have bolstered their plant-based alternatives with an array of indulgent mains.

Whether you are looking to sink your teeth into a mushroom wellington, or satisfy your craving for festive haggis, there are choices to accommodate every palate and price range.

My favourite among these has to be Wicked Kitchen’s no-turkey crown - a succulent, tender roast served in a rich stuffing and mushroom gravy.

Made from an array of wheat proteins, a single tray serves four - an ample offering that can be incorporated into cranberry and stuffing sandwiches well after the big day is over.

Christmas isn’t Christmas without the sides. And let’s be honest, for a long time that was all vegans could hope for.

We saturated ourselves with brussel sprouts, roast potatoes and stuffing balls, dreaming of the day we could gorge ourselves on plant-based pigs in plant-based blankets.

Well dream no longer, friends, because that day has finally come.

Meat alternative manufacturer, This, has heralded a new age with the creation of their pork-free appetiser - a marinated cocktail sausage enclosed in a crispy fake bacon exterior.

These plant-based pigs take only ten minutes to cook, so throw them in the oven before your guests sit down to eat and you’ll have them drooling in no time.

We all know the feeling. You’ve inhaled an entire nut roast, two tonnes of potatoes and enough gravy to fill a moderately-sized paddling pool.

“Go on without me,” you mumble incoherently, as whispers of dessert spread from the head of the table.

But as you prepare to abandon your post, you spy the trifle sitting on the countertop and the Eton mess being excavated from the back of the fridge. The time for dessert has come, and your hunger reemerges with a sudden vengeance.

I have been victim to many experimental sweet dishes over the last 10 years.

From chia seed puddings with the texture of frogspawn, to key lime pies contrived of silken tofu, it has been a long and unappetising road.

But after gritting my teeth through innumerable slices of apple strudel, things have changed for the better this year.

Herbivores can now rejoice in a wealth of faux-dairy delights, such as Plant Pioneer’s chocolate and salted caramel star.

This rich and smooth panna cotta from Sainsbury’s serves up to six people, although you’ll probably want to get two if you plan on going back for seconds like me.

And if cold desserts aren’t your thing, M&S has fashioned a melt-in-the-middle chocolate pudding which might satisfy your sweet-tooth this Christmas.

It tastes even better when served alongside ice cream, so be sure to pick up some of Wicked Kitchen’s birthday cake ice dream to top it off.

Who said a vegan Christmas had to be boring?

Time to put your feet up

That’s it. The job is done.

The guests are fed. The washing-up is over. It’s time to sink into an armchair and watch Michael Caine sing “It feels like Christmas” once again.

But much like the Ghost of Christmas Yet to Come, hunger rears its ugly head when you least expect it. You can’t stomach another meal, but you could certainly enjoy a light snack.

And what better to send you into a post-dinner slumber than a vegan cheeseboard to share with the family?

Well fear not, because 2021 saw the creation of the best vegan cheese I’ve ever eaten.

And rest assured, I’ve tried it all.

I’ve sunk my teeth into coconut-based cheddars, doused crackers in soybean spreads and bitten off chunks of barely-edible brie, but no-one has managed to recreate the distinctly tangy splendour of the real thing - until now.

Using conventional cheesemaking cultures, the good people over at Kinda Co. have devised this Magnificent Christmas Cheeseboard - a hamper containing ten of the most irresistible vegan cheeses you’ve ever laid your eyes upon.

Each block boasts a unique flavour profile reminiscent of naturally ripened cheese, complete with a nutty, camembert-like aftertaste which will keep you at the fridge door for days to come.

So sit back, relax and don’t forget the crackers this year - a guilt-free Christmas is not only possible, but tastier than ever.