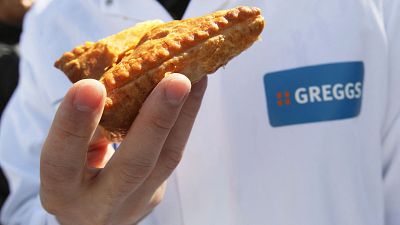 British fast-food chain Greggs has warned its vegan sausage roll could be the latest product to succumb to supply chain disruption.

The vegan sausage roll - light puff pastry with a seasoned Quorn filling - was launched by the high street group in 2019 and quickly became a popular (and healthier) alternative to its classic sausage roll. Mcdonald's recently launched a similar vegan alternative of its signature burger, called the McPlant burger.

The sausage roll deficit follows panic buying at Britain's fuel pumps, soaring heating prices and limited supplies of crisps in supermarkets. This has been caused by a shortage of heavy goods drivers to make deliveries, with the coronavirus pandemic, Brexit and tax changes all contributing to a lack of qualified drivers.

Based in Newcastle in northeast England, Greggs says there were "temporary interruptions" to supplies of products including vegan sausage rolls across the United Kingdom.

"Some shops may not have them or may not have them throughout the day. It varies," says a spokesperson for the chain, adding that the firm was working hard to minimise the disruption and did offer a broad range of alternative snacks.

Greggs has not been immune to the pressures on staffing and supply chains due to the impact of Brexit.

Stores in the UK capital were particularly hard hit with Greggs branches in Twickenham, Richmond and Earls Court out of vegan sausage rolls in the first half of this week, its new outlet in Canary Wharf out of the product on Tuesday and Wednesday and its South Woodford branch out of stock on Wednesday.

CEO Roger Whiteside warned last month that Greggs has not been immune to Britain's pressures on staffing and supply chains due to the impact of Brexit.

The retail sector veteran told Reuters he wakes up every morning asking what new item has disappeared, but he that pledges not to run out of sausage rolls.

Despite the supply chain disruption, Greggs has recovered well after its business model was hammered by the pandemic and its shares are up over 70 per cent this year.

Apart from vegan sausage rolls, how is Greggs reducing its carbon footprint?

Greggs has made a name for itself as the fast food chain with the best vegan sausage roll, which has experienced a "meteoric rise" in popularity ever since it was launched in 2019.

But the company has other less known, environmentally-friendly measures in place too.

By 2025, Greggs is aiming for at least a quarter of its stores to be 'Eco Shops'. The Eco Shop template considers energy efficiency, building materials and technology - as well as recycling. In 2019, it cut 350 tonnes of single-use plastics from its operations and, by 2025, it wants to eliminate all unnecessary single use plastic from shops and manufacturing sites.

It is also one of the only fast food chains to use an Environmental Management System to help minimise the environmental impact of all its operations.